One has a lot of options when choosing how to spend a day in Glasgow. There are museums, pubs, parks, galleries, clubs... all this things you'd expect to find in a good-sized European city. But, being a touch macabre, Matt and I opted to spend the majority of our Glaswegian day in the Necropolis, or The City of the Dead. It is the final resting place to over 50,000 buried persons, so it has earned it's name! (It is neither here nor there, but this cemetery's population is about 5 times of that of my hometown.)

The Necropolis is on top of a hill dotted with old gnarled trees (of course) and the tombs in some places seem stacked on top of each other. 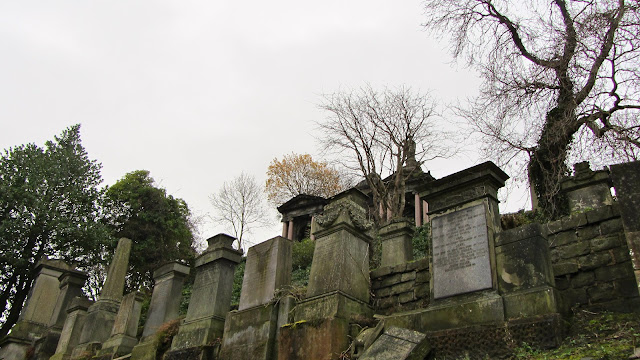 It is not a particularly hefty climb up, but once you reach the top, the views stretch out over the whole city. 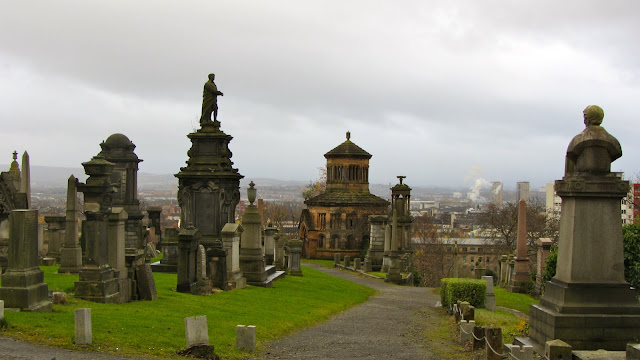 Some of the tombs are elaborate, some of them are cracked or tumbled to the ground. All of them have seem a lot of weather. 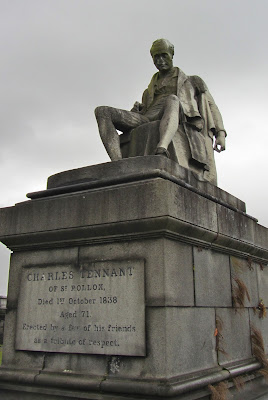 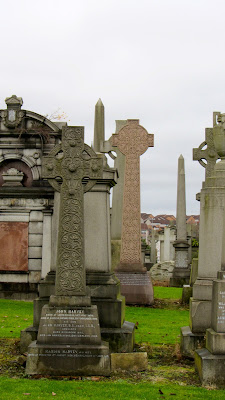 We saw a tomb for a Tennant, and we saw the brewery for Tennant's beer that borders the lower section of the cemetery. Not sure if it's the man responsible for the brand, but if it is, he sure didn't get too far away from work. 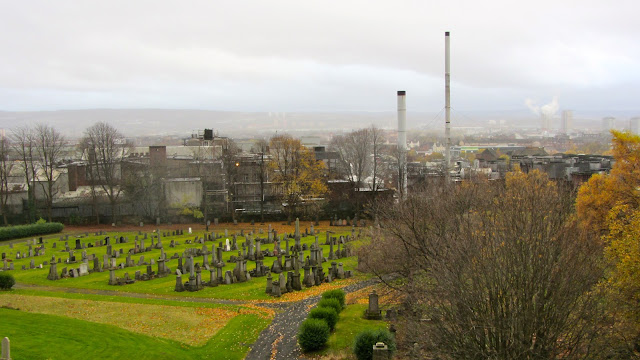 The headstones went on and on. Row after row... 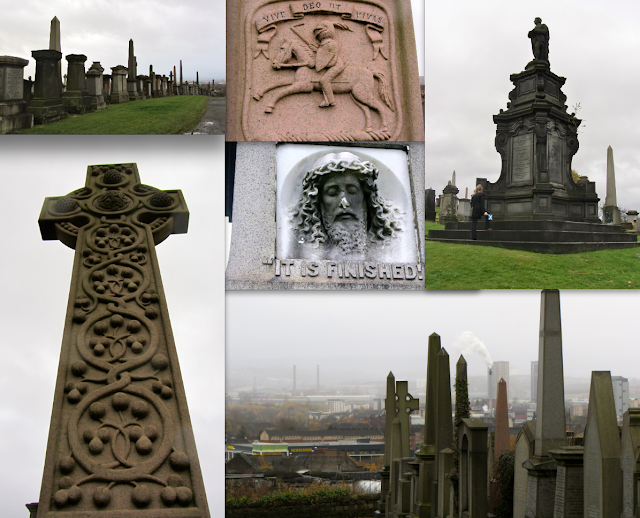 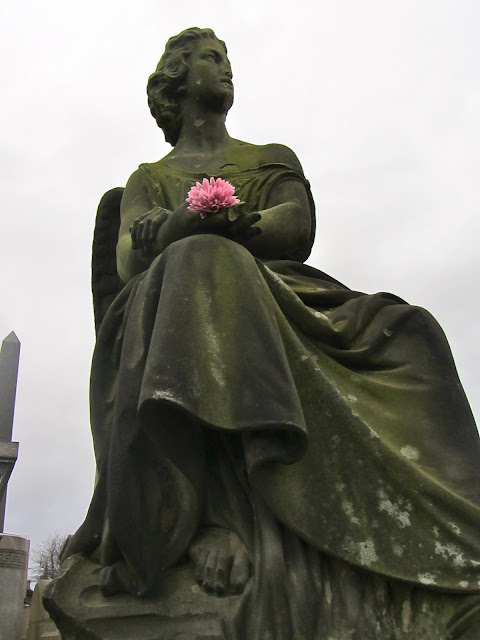 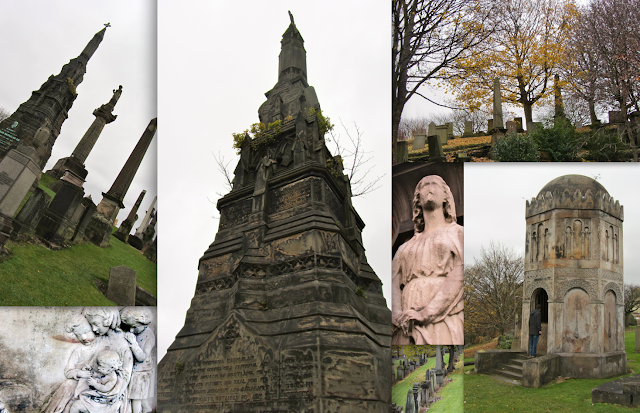 Predating the majority of the cemetery is the monument to John Knox, supporter of the Protestant Reformation and father of Scottish Presbyterianism. I don't know too much about the man, but he does seem to be a bit... what's a good way of saying it... dour.  Below, I am inappropriately dancing about and waving flags on his monument, which I am certain he would not appreciate. Although I think it's pretty safe to say he did not appreciate the activities of most women, considering he wrote a book titled The First Blast of the Trumpet Against the Monstruous Regiment of Women. Lest you find my dancing too disrespectful, let me tell you that this is not the grave of the late reverend. He is buried in Edinburgh, outside of St. Giles Kirk, beneath a perfectly ordinary parking spot.  And you can blame Matt, not me, for his decapitated state in this photo! 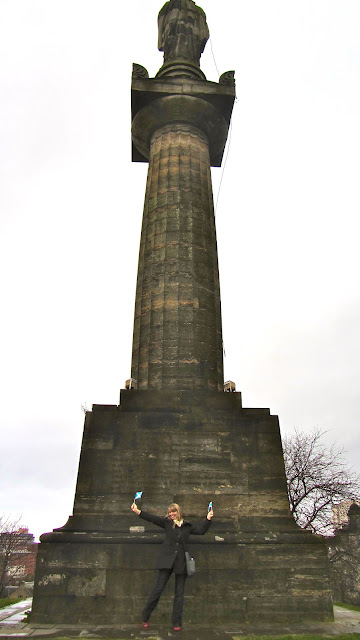 So, what is the tallest monument in the Necropolis, the monument of John Knox, anti-Catholic and champion to Presbyterianism, looking out upon?!

This huge Cathedral. The Glasgow Cathedral was built in 1197. (I repeat, 1197.) And it has never been burned down or sacked or blown apart or anything in all those years. It is in remarkable shape... 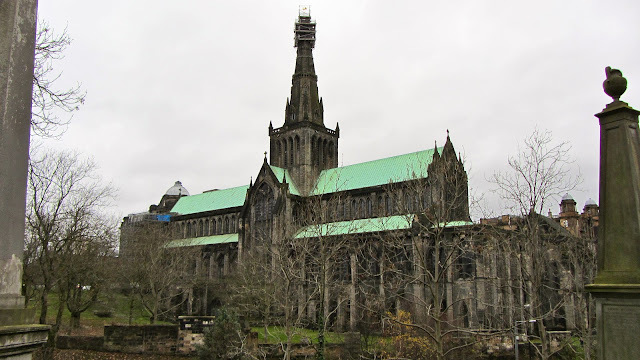 ... even though it was heavily covered by scaffolding! Maintenance aside, it was very cool to roam about a Cathedral that has the same roof, even some of the same doors, as it did nearly 1000 years ago. 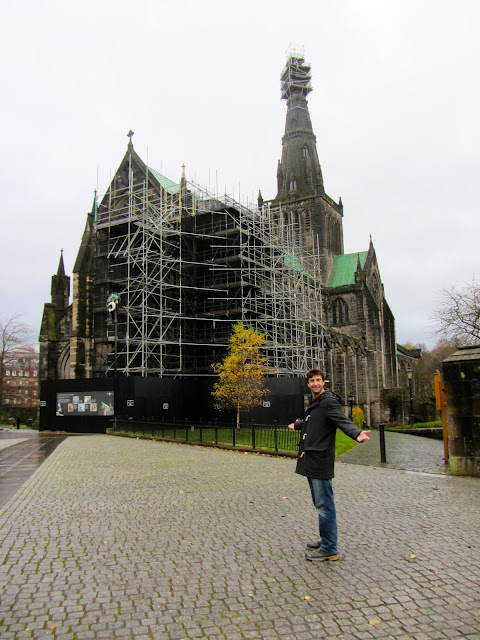 And whether or not you agree with any of the ideology, you've got to admit that when it comes to building impressive structures, the Catholics knew what was what! 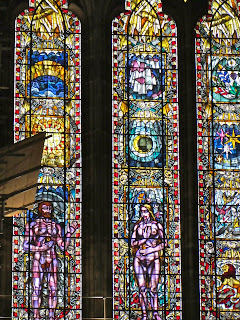 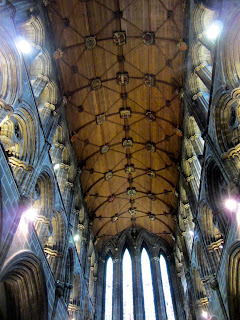 The Glasgow Cathedral (Called St. Mungo's to the parishioners) has an extensive series of underground  chapels, altars and tombs. Matthew posed me for this photo in the Blacader's Aisle (seriously, he told me right where to stand and this is what I get!) 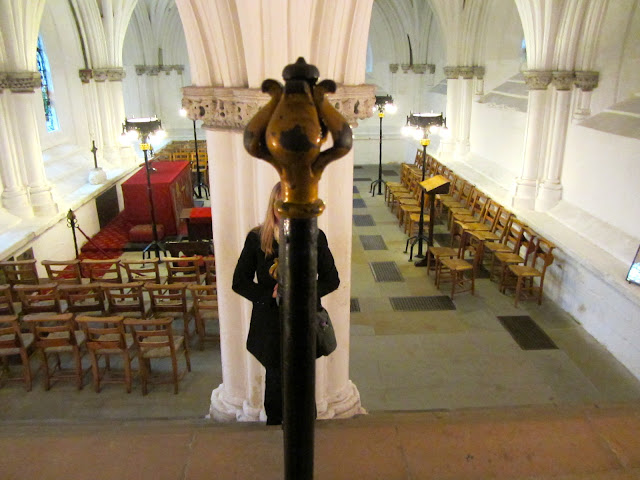 And deeper down below the nave, is the tomb of St. Mungo (or St. Kentigern, but his friends all called him Mungo) who was believed to be buried on this exact location in 603. 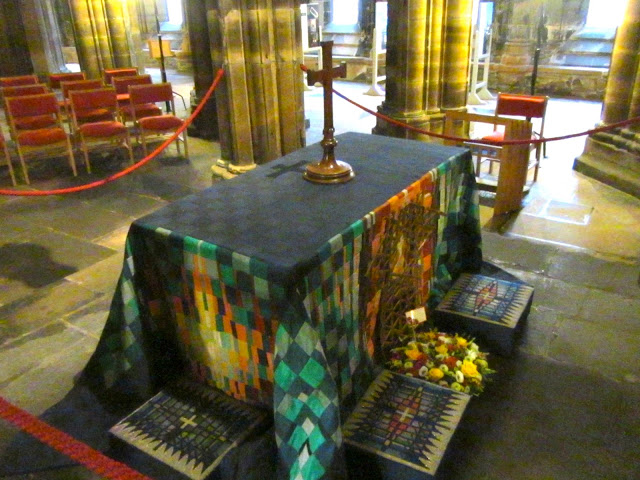 We didn't hang out in cemeteries and underneath cathedrals all day. We also took in Glasgow's beautiful architecture... 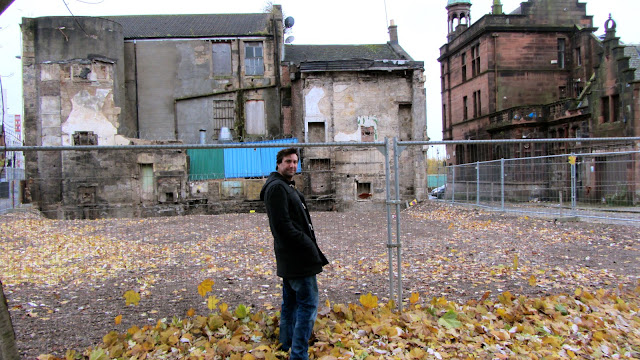 I'm kidding with this picture! Really, this picture aside, Glasgow is beautiful. I am just teasing since I've heard there is a competition between Glasgow and Edinburgh. Rumor has it that it goes something like this: Glaswegians think that Edinburgh is snooty (enlightened), pretentious (artsy) and expensive (expensive). Edinburghians (although no one really calls them that) find Glasgow to be gritty (edgy), plebeian (working class) and rowdy (rowdy).

But back to our lovely day in Glasgow...

It's where I found the TARDIS! 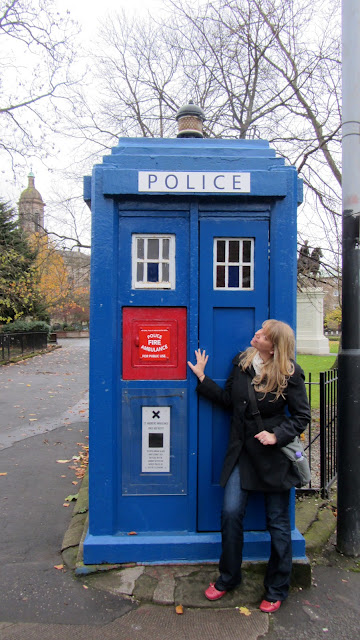 And my first clootie tree! Clootie, in Scots, means cloth. And there are little bits of cloth tied around this tree's branches. I did a little asking around and I found out that clootie trees have been around since the ancient Celts. Usually, they were trees that grew beside some sacred waters, a spring or a well with some significance. These waters and clootie trees attracted pilgrimages and were part of a healing ritual.  A  person would bring along a scrap of cloth, dip it in the waters, and tie it on the tree. If you made the pilgrimage to rid yourself of an ailment, you  might use a bit of cloth that was grotesque as representation. If you were making an offering to the spirit of the well, or making a hope or prayer, you would use a bit of beautiful fabric.

Most of the clooties on this clootie tree were brightly colored ribbons and even a few bits of silk. It was growing beside a iron a fountain. 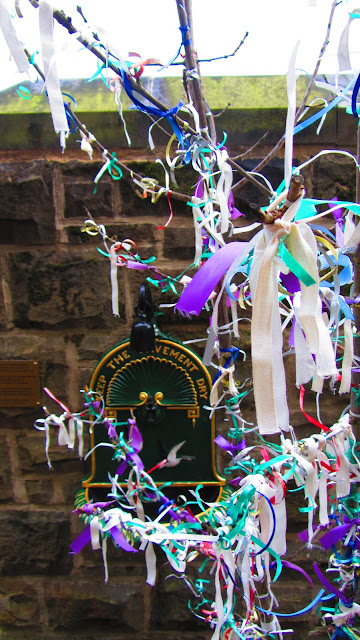 We also saw another kind of special tree. A Christmas tree! The workers were setting it up in George Square, along with thousands of fairy lights and other decorations. We may have to take another trip to Glasgow in December to see it all lit up! 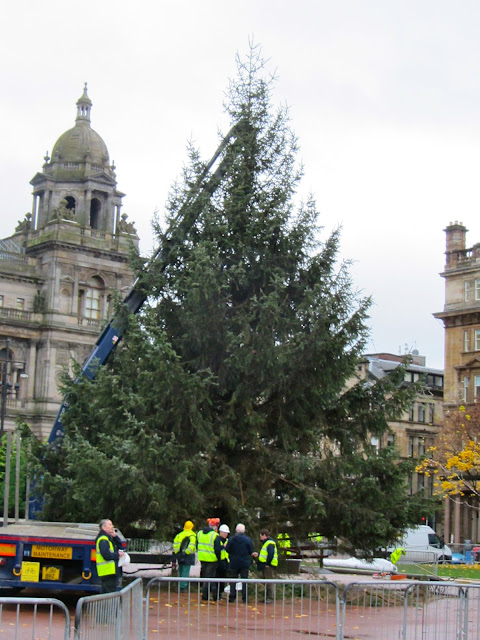 Matthew and his trusty iPhone led us to the banks of the River Clyde. Where we got to do some birdwatching and then stomped across the pedestrian's suspension bridge (trying to see if we could make it sway). 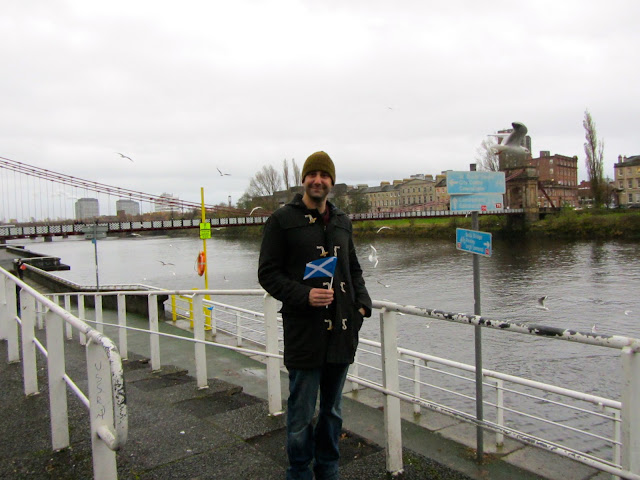 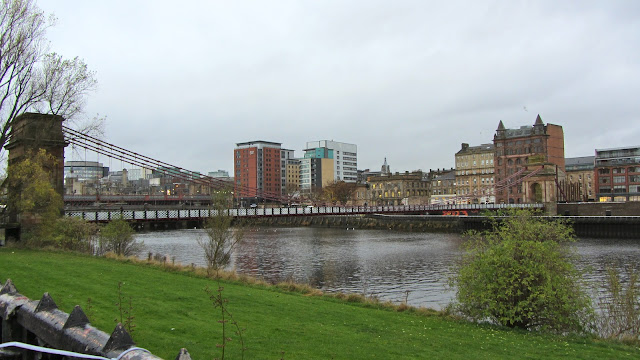 We grabbed some nourishment at a little pub in the city centre. After spending most of the day walking around town, around graves, over rivers and around trees, I was pretty darn drookit (drenched) and for the first time in my life, I used a hand dryer in the loo to warm up and blow dry my hair. I am getting to be pretty hardcore. 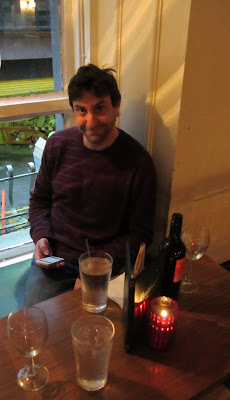 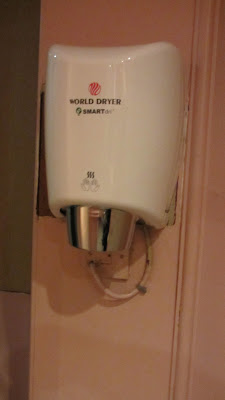 The day ended at Barrowland-- where Matt and I danced the night away in the second row of the totally wonderful Alabama Shakes show. Man, I knew that girl could sing- but I had no idea she was such a rocker! 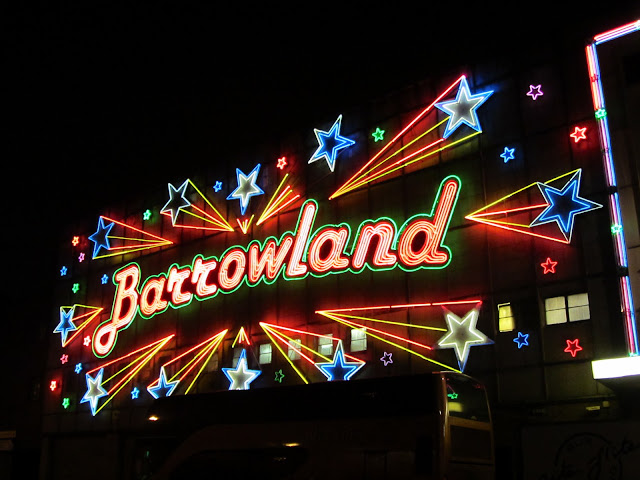