And now for something completely different...

OK, the title of this post is totally misleading, because I am going to share with you another fantastic Scottish castle, which isn't very different at all from my regular programming... but there is something unique about this particular castle

I mentioned in a previous post that on our weekend out of Edinburgh we visited a castle named Doune. Back in 1975, Doune was a film location for a certain funny little movie. One that I am sure many of you have seen... 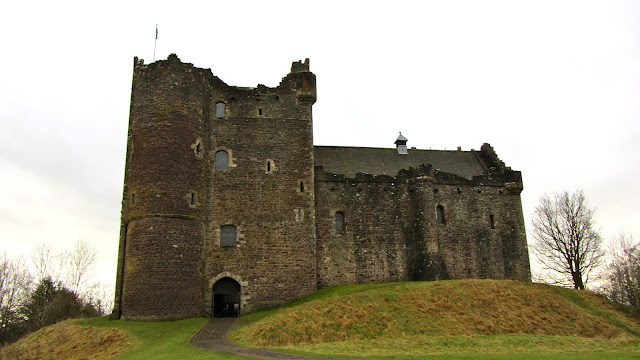 but maybe you'd recognize it better if we approached from the side... 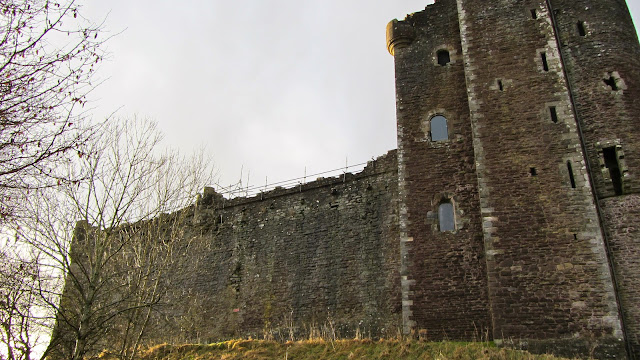 just like the noble knights of the round table. 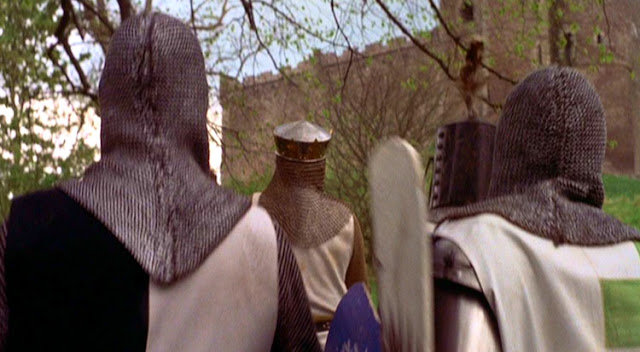 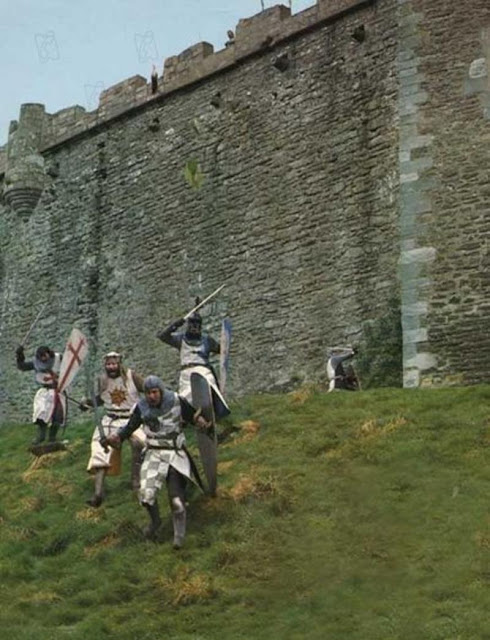 Need another hint? Here, watch this: my directorial skills are nearly as good as Matt's delivery-


Surely you know what movie it is by now! Unfortunately for us, that exact wall was the only part of the castle that was closed to visitors (they are taking away concrete bits so that water can escape the stone instead of causing the wall to crumble from the inside out, so I guess that's more important than us climbing on top and yelling poorly memorized taunts at one another in horrible french accents). We did get this wee view from an upstairs window! 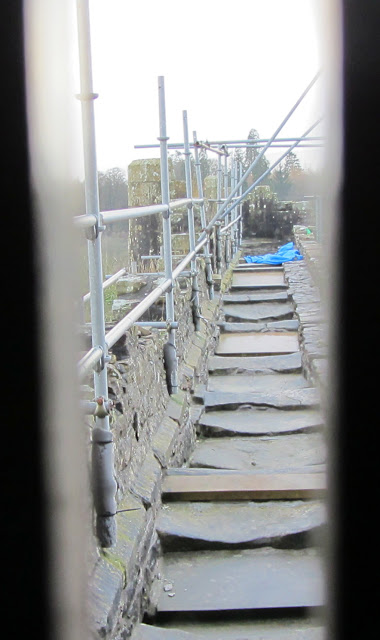 Good thing there were other parts of the castle used in the film where we could play about! Like this stone staircase leading from the courtyard into the kitchen tower... 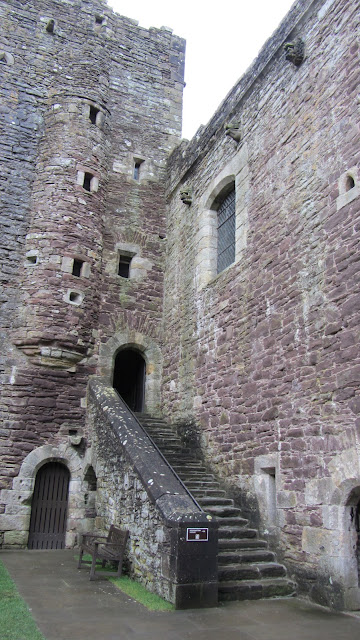 the same one stormed by brave Sir Lancelot as he massacres a wedding party rescues a captured bride-to-be... 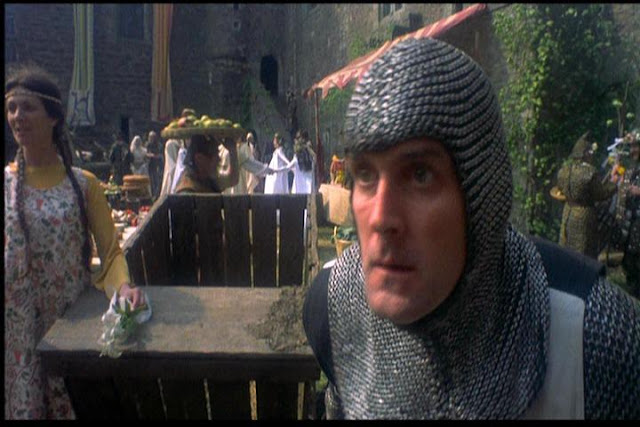 Which has been fabulously recreated with Legos!
But if you insist, have a watch of the real scene (but don't blame me if it takes you 15 minutes to read this blog post!)

I took a photo of this view... 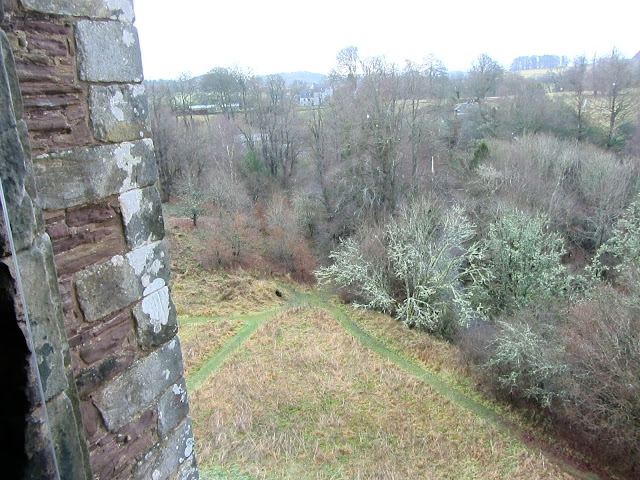 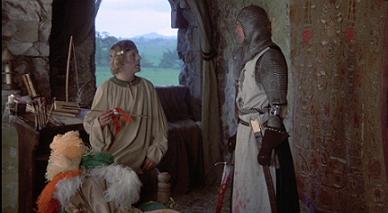 We played about the great hall (one of the best preserved in Scotland for its age) but it looked different without myriad dancing knights, 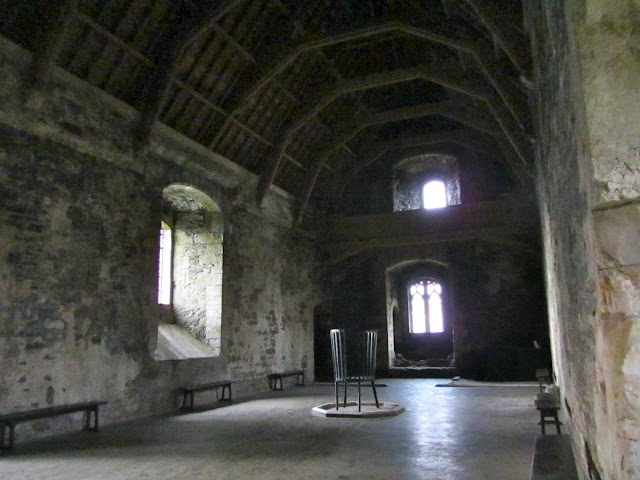 And the kitchen, while amazing, was sadly (for Matt) temptress-free! 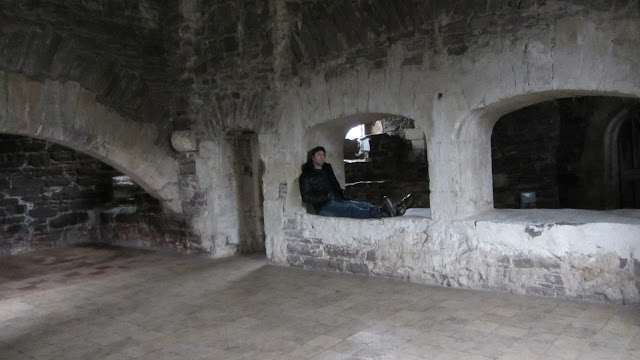 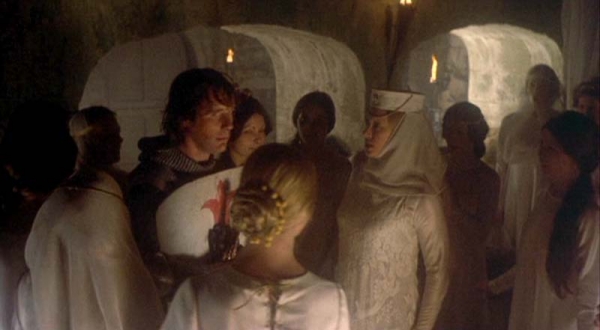 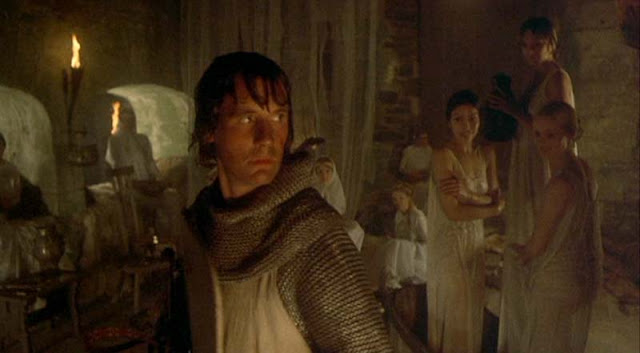 And according to the very funny and informative audio tour (narrated by Terry Jones) the huge stone oven, large enough to roast an ox on a spit, 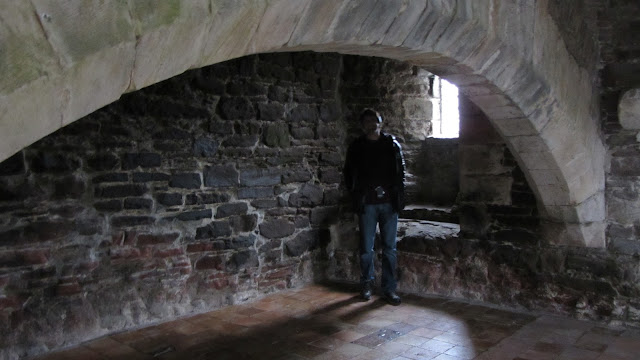 was where the ladies made a bed for young Sir Galahad. 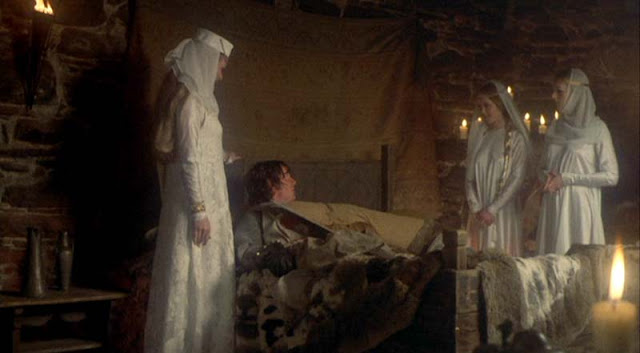 But just like there are lots of great scenes from the movie that are not filmed at Doune (like when King Arthur fights the Black Knight!), there are tons of interesting historical bits to the castle that have nothing to do with Monty Python.

\This stone, part of the frame to the huge window in the kitchen, shows the marks of where the cooks sharpened their knives nearly 800 years ago. 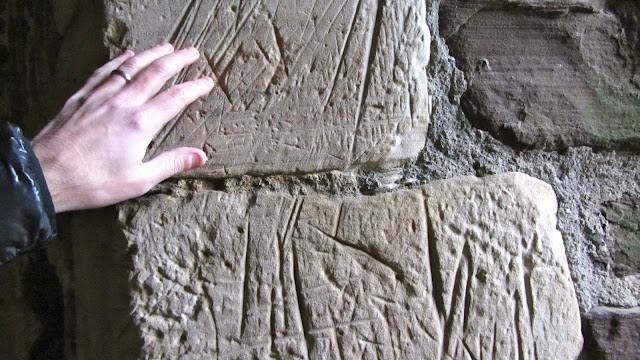 And the chamber where we found this fireplace was used to entertain and house the fanciest of guests (I wish the fire had been going that day, as it was a bit drafty in the castle. And sitting on stone, fireplae or not, is a quick way to get even colder!) 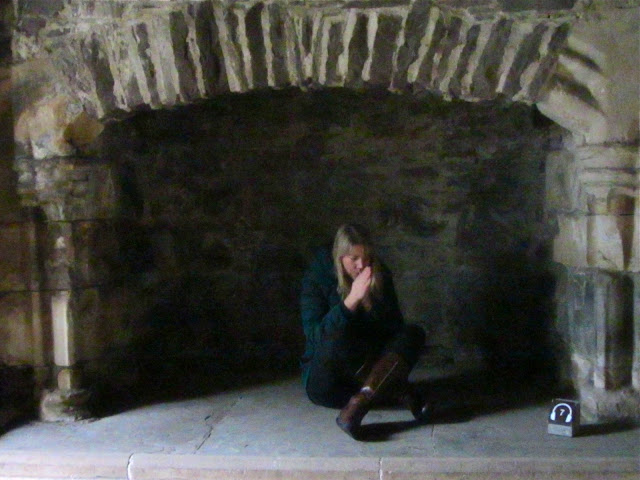 We broke a few rules, but only a tiny bit... cheeky naughty tourists! ﻿ 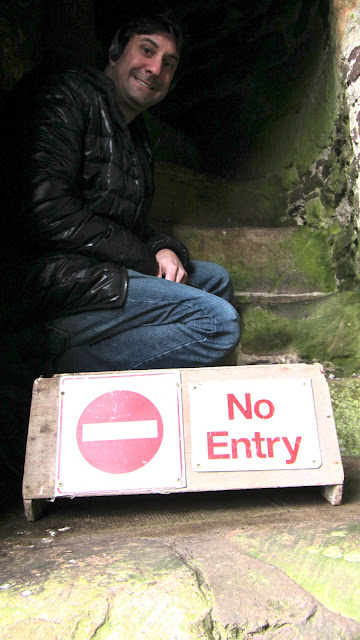 We checked out the loo- a most comfotable room, really. It had a window for ventillation and a vent to allow in heat from the adjacent room. It even had a little nook in the wall that would have had strips of linen or bits of moss to use to ... you know. ﻿ 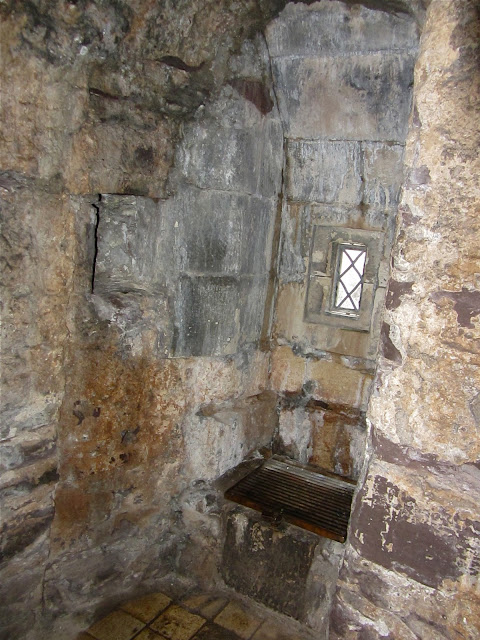 And from the loo, you have this view- That is the river Teith, and one local said that when soldiers were called to protect the region, they were to come 'armed to the Teith'.﻿ 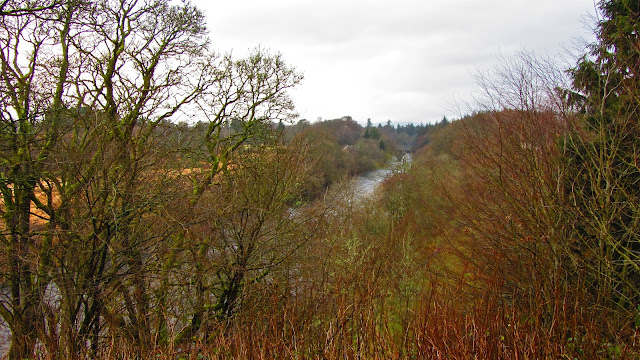 Of course we climbed stairs. Lots and lots of circular stone stairs! If I had a shilling for every old stair I've climbed in the last few months I'd have... well, nothing really, since nobody uses shillings anymore. But you get what I mean. Exploring historic sites = stairs!﻿ 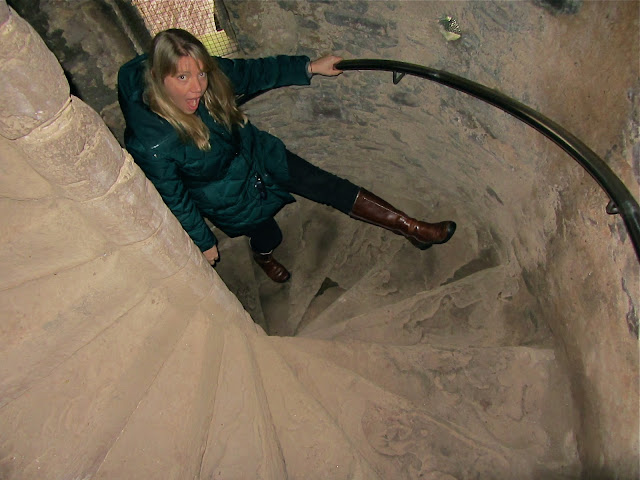 So there you have it. Doune Castle... really quite magical. 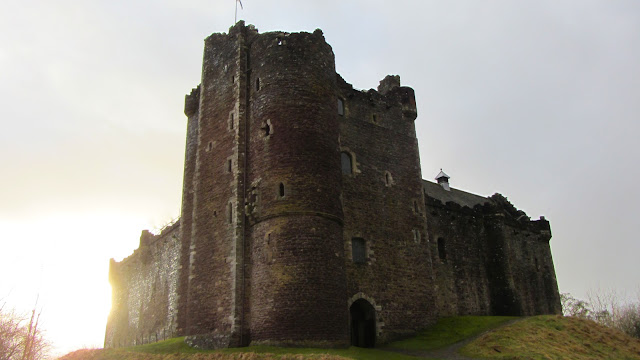 After our visit, we rode off into the sunset,

and had ourselves a pint! 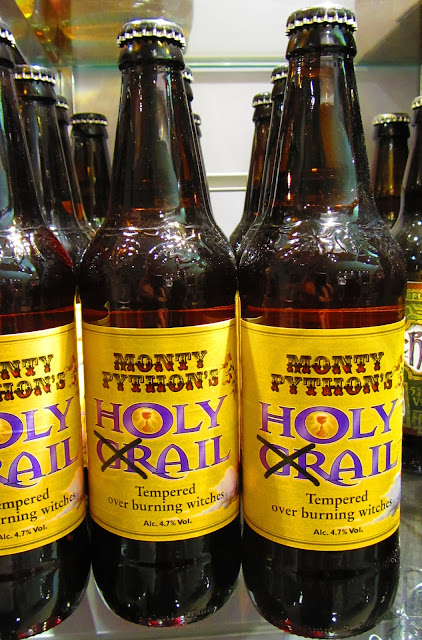 And just in case it's not utterly clear, the movie filmed at Doune Castle was Monty Python and the Holy Grail. Go rent it, you know you want to see it again!