Greeting the new year with friends and spirits is customary in many parts of the world. Residents of Scotland mark the arrival of the new year with particular passion in a holiday they call Hogmanay that draws on their history of Viking invasions, superstition, and ancient pagan rituals.
Hogmanay's origins date back to pagan rituals that marked the time of the winter solstice. Roman celebrations of the hedonistic winter festival of Saturnalia and Viking celebrations of Yule (the origin of the twelve days of Christmas) contributed to celebrations in Scotland around the new year. These celebrations and other ceremonies evolved over the centuries to become the Hogmanay holiday celebrated in Scotland today. 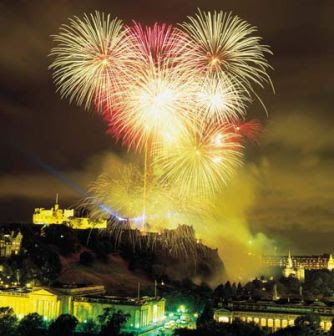 For many centuries in Scotland, Hogmanay was a far more important holiday than Christmas. Historians suggest this may have been a result of the Protestant Reformation after which Christmas, and its close ties to the Roman Catholic Church, was seen as "too Papist." Others point to the grueling work schedules of laborers during the Industrial Revolution which did not provide time off for the Christmas holiday.
Only in the mid-20th century did Christmas emerge as the popular holiday it is in other Christian countries. But don't be fooled—New Year's still reigns supreme. In the last several years, two of Scotland's cities have hosted some of the largest street parties in the world.
http://www.edinburghfestivals.co.uk/new-year-in-edinburgh 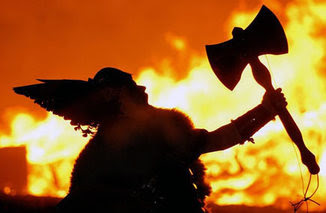 A custom known as "first footing" dictates that the first person to cross a home's threshold after midnight on New Year's Eve will determine the homeowner's luck for the new year. The ideal visitor bears gifts—preferably whiskey, coal for the fire, small cakes, or a coin—and should be a man with a dark complexion. Why? The answer hearkens back to the 8th century, when the presumably fair-haired Vikings invaded Scotland: a blond visitor was not a good omen.
Although less commonly practiced today, friends celebrate first footing by visiting each other's homes shortly after midnight. They share food and drink and exchange small gifts. It is also customary to sing Auld Lang Syne, the traditional song famously transcribed by Scottish poet Robert Burns.
Another custom is to clean the house thoroughly and burn juniper to rid the house of evil spirits in the coming year.
Many Hogmanay traditions involve fire, another throwback to pagan and Viking times. It is believed fire symbolized the sun's return after the winter solstice or was used to ward off evil spirits. 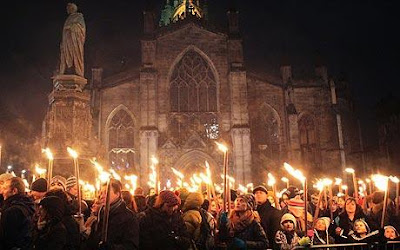 Locals in the small town of Biggar in southern Scotland have built a bonfire every Hogmanay for hundreds of years, despite the complaints of some residents.

In Stonehaven, a town on Scotland's east coast, the Ancient Fireballs Ceremony unfolds as sixty locals march through the town swinging large flaming spheres over their heads.
Even more extreme is the ritual known as Up Helly Aa, which is carried out in towns in the Shetland Islands on the last Tuesday in January. A custom dating only back to the early 1800s, Up Helly Aa involves entire towns dressing up as Vikings and ceremonially burning a replica of a Viking ship—followed by raucous celebrating.
No one can say for sure which traditions came from exactly where exactly when, only that thousands of years of history have blended to create the cultural centerpiece of the Scottish holiday season. 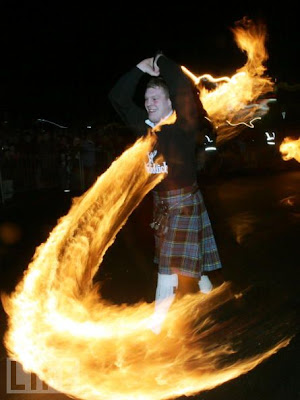 Hogma-what?
Even the origin of the word Hogmanay is a subject of debate. A few possibilities: It may derive from the Gaelic oge maiden meaning "new morning"; the Celtic hogunnus meaning "new year"; hoog min dag, a Flemish-Dutch phrase meaning "great love day"; or the Old French word aguillanneuf, which refers to both the last day of the year and the gift traditionally given on that day. The last possibility seems especially likely since one of the old Scottish traditions was for children to run from door to door on New Year's Eve asking for presents and shouting, Hogmanay!
Whatever its origins, Hogmanay is an integral part of Scottish culture today. Apparently, one day to recover isn't enough: January 2nd is an official holiday in Scotland, too.
Article is authored by: Lara Suziedelis Bogle for National Geographic News December 31, 2002 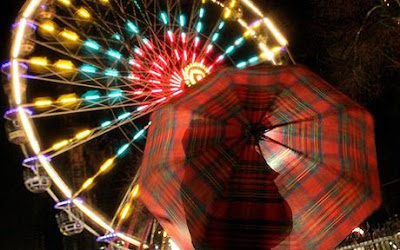 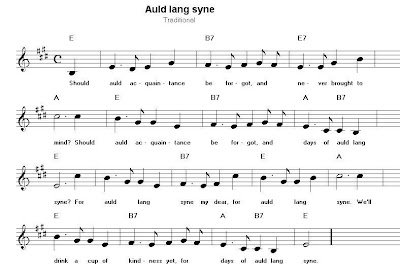 
And surely ye’ll be your pint-stoup!
And surely I’ll be mine!
And we’ll tak a cup o’ kindness yet,
For auld lang syne.

We twa hae run about the braes,
And pou’d the gowans fine ;
But we’ve wander’d mony a weary fit,
Sin’ auld lang syne.

We twa hae paidl’d in the burn,
Frae morning sun till dine;
But seas between us braid hae roar’d
sin’ auld lang syne.

And there’s a hand, my trusty fiere!
And gie's a hand o’ thine!
And we’ll tak a right gude-willie-waught,
For auld lang syne. 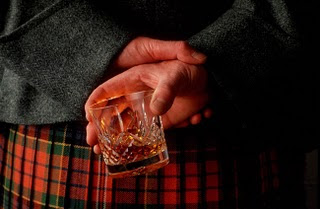