Being married means doing things the other person wants to do from time to time. Last week, Matt escorted me to a Harry Potter-themed Ball. I'm pretty sure it wasn't on the top of his list of things he really wanted to do, but he went and he had a good time. And because of that, I had a blast.

So, in the interest of fairness and loving-wifely-duty. I took Matt here: 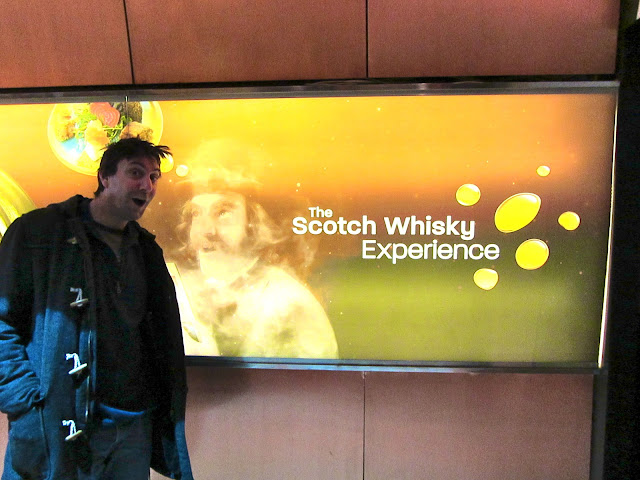 The Scotch Whisky Experience is really close to Edinburgh Castle, and it is geared quite a bit to tourists. In honor of St. Andrew's day, though, they allowed "locals" to take their Silver Tour for free (so long as they pre-booked a space in advance). I got an email saying as much and thought it would be a nice treat for Matthew, especially during his final week of this first semester. I thought I might as well check it out too, seeing that it was free and all. Also, since we live in Scotland and since I generally like boozey things, I figure I ought to know how the national drink is made.

Little did I know, that you get to go on a ride! Seriously! The tour begins with a ride through the whisky making process, starting with rain and ending with the stuff in the glass. We took it all in aboard large whisky barrels on a moving belt (think Haunted mansion in Disneyland) 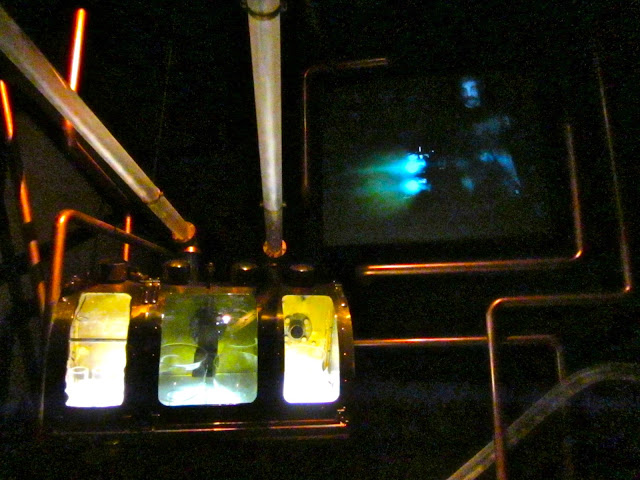 And funny enough, our ride ended up with us in the tasting room... where we were schooled (quite literally, there was a presentation with slides and everything) on the distinct Scotch-making regions of Scotland and their main characteristics. The Lowlands, with their mildest flavors and hints of citrus; the Highlands with tones of heather and vanilla; Speyside, the fruitiest of them all; and Islay (pronounced eye-luh) with the manliest flavors of smoke and peat.  (While I can appreciate the blazingly obvious differences between some of them, for the most part, they all just taste like incredibly strong alcohol to me...) 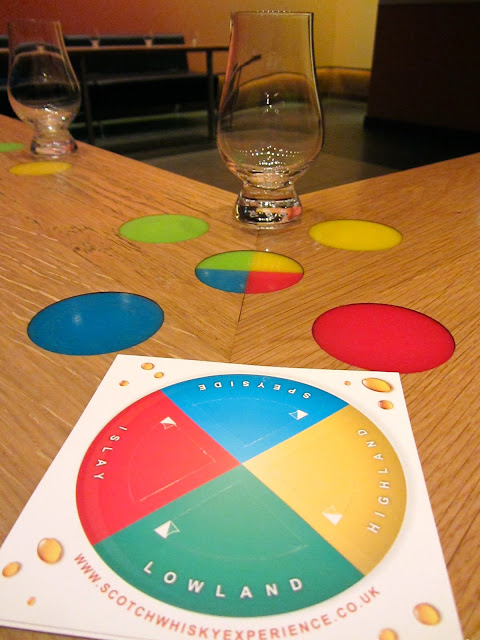 I went for a taste of the Speyside pour. Matt braved the Islay... 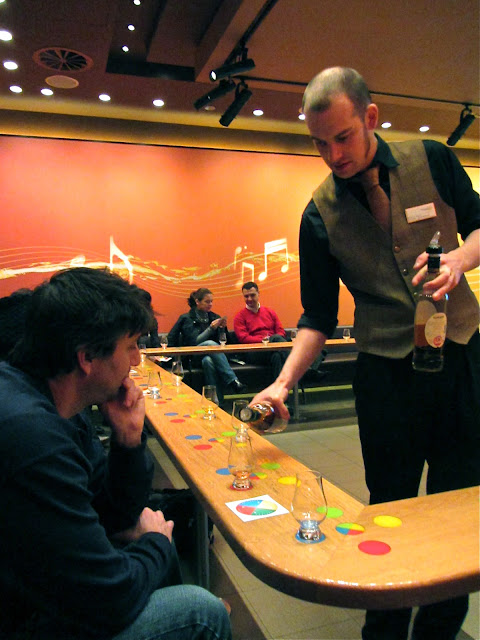 We took our drams into a meandering room, where each wall, from floor to ceiling housed the world's largest whisky collection. It is permanently on loan to the Scotch Whisky Experience from it's owner. I forget just how many individual bottles there are, but it is a ridiculous amount. There are no repeats. None of them have ever been opened. And there are loads. 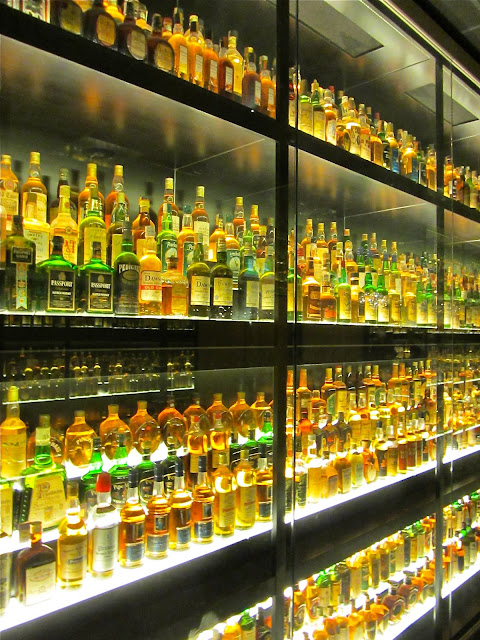 And some of them are quite old. The oldest dating back to 1897. 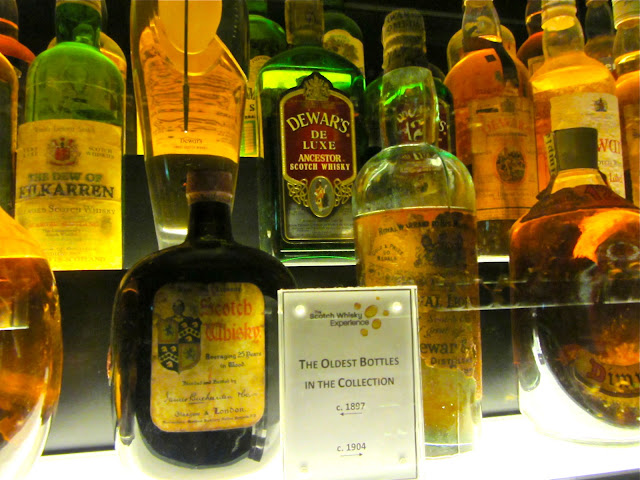 The place must be interested in superlatives, because it also has the world's largest bottle of single malt Scotch whisky in the world. 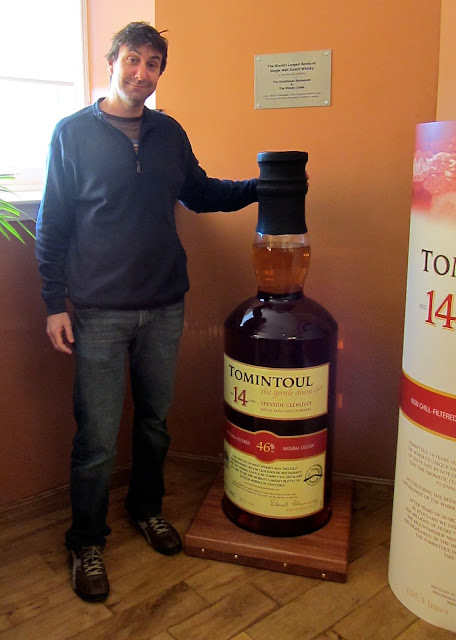 And the tour dutifully ends at the whisky bar, instead of in a gift shop (although they have one of those too). Matt had another dram (well, two, if you count the one I tried to drink). The staff is very knowledgable and talked him through their vast selection. I find that just about everyone in Scotland is willing to talk at least a little about Scotch!

But don't say cheers as you raise your dram, say Slainte Mhath... which isn't pronounced at all like it looks. It comes out sounding a lot more like slan-ja-va. 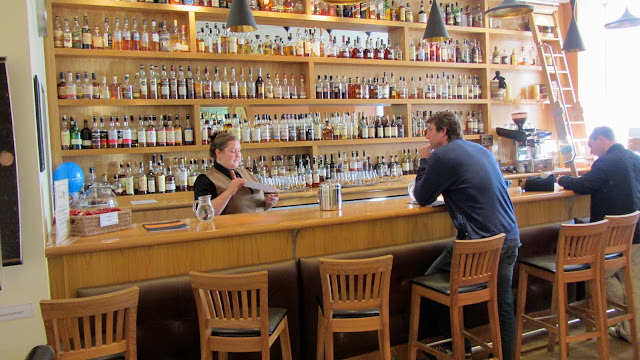 PS- As soon as we were done with our tour and extra credit drinking, I forced Matt to the restaurant in the basement. It actually has lovely arched windows and overlooks the hill above the Grassmarket. My delicious cup of lentil and carrot soup and sandwich were especially appreciated, since we skipped both breakfast and lunch before hitting the whisky. Perhaps, that's the real Scotch Whisky Experience!) 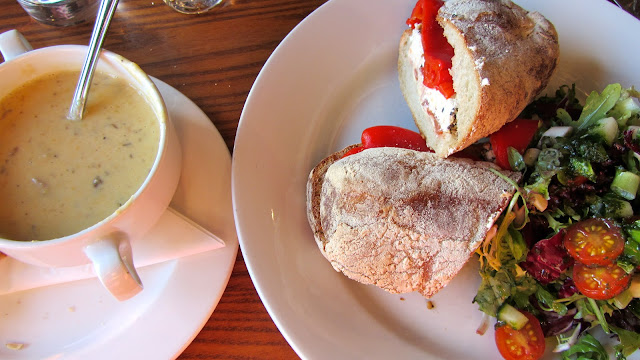