As I walked home from work last night, I passed the large and modern Omni Movie Theatre. It has a few steps in front of it, and at the base of the steps is a metal strip, that is about 3 or 4 inches wide and 15 or 20 feet long. It has holes in it, so I figure it functions as some sort of drain. Fascinating, right? I promise, I have a point. Anyway, as I am walking home last night, during a break in the snow/rain that had fallen off-and-on throughout the day, I pass the theatre and notice that a man is purposefully sliding on this metal strip just for kicks, like a outdoor and icy version of Tom Cruise's famous move in Risky Business. I can't help but watch this guy and I see that he is well into his 50s. He is nicely dress, in fact part of the reason he's getting so much distance on his slides is because he is wearing fancy dress shoes-- probably some slick-soled thing made in Italy and deliberately not intended for such Northernly activities as walking in slush and ice. I watch him the whole time it takes me to walk past the theatre, which is about a minute, and I'm smiling the whole time, because without knowing anything else about him I know that I like his style. He's not too old to have a silly good time.

And neither are we!

So, because we are not too old to be silly (and enjoy things that might be intended for a younger demographic) and because Matt is Best Husband of the Year... we attended Snow Ball, 2012. What is Snow Ball 2012, you ask? It's an amazing night of music, dancing, eating, drinking, giving, laughing, singing, and general rocking out. Oh, and it's all about Harry Potter. Everything. The decor, the food, the music-- especially the music! 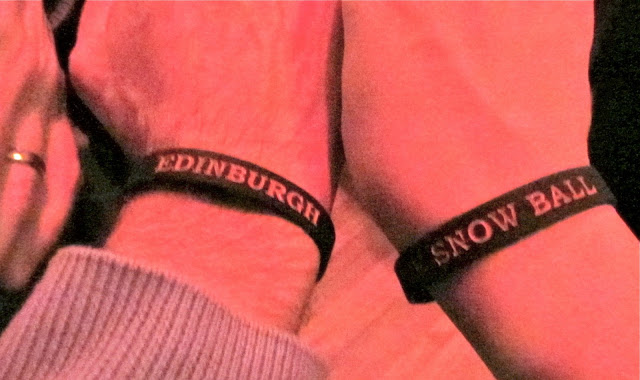 The Ball was held at Teviot Row House (which I have mentioned on this blog before) and the room was festive with tartan, lights and all sorts of house banners... 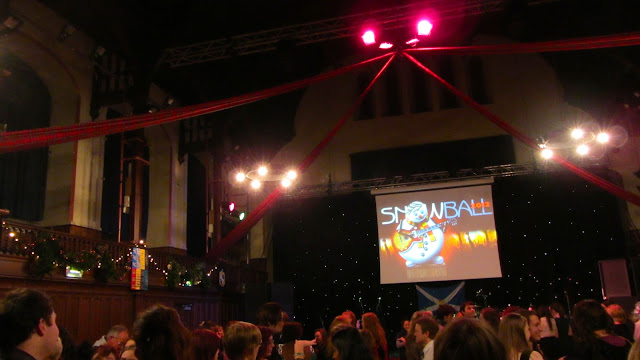 We drank bubbly drinks and ate cake... sugary goodness in the form of Hogwarts, Hagrid's hut and the the Black Lake (complete with Giant Squid tentacles). 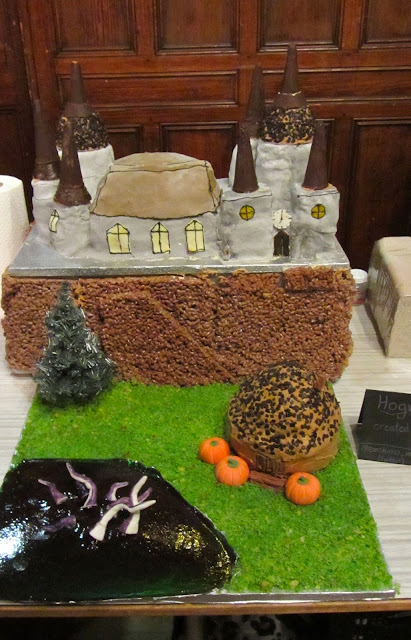 One of the opening acts, Siriusly Hazza P, was cute and girly and rock-a-riffic... (OK, I apologize for that word). their last song was for Fawks, and the MC of the night, the man who put the whole thing together, donned phoenix feathers (and a kilt) and pantomimed the great bird. 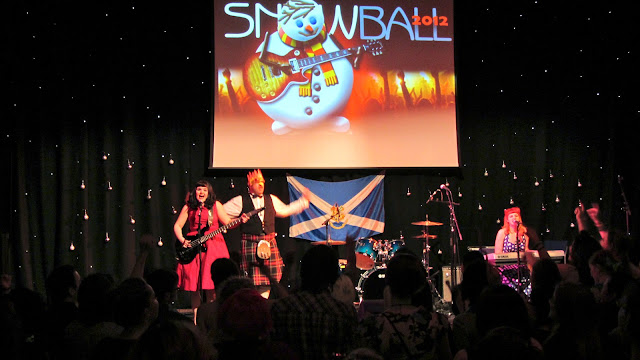 And in case you're wondering, that in the background, is the Scottish flag, with the Hogwarts crest in the middle... 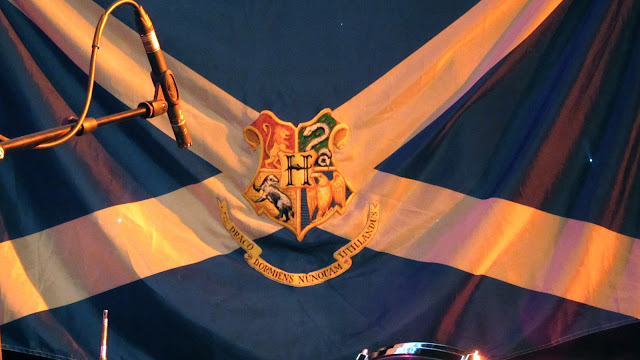 And a secret guest graced the stage before the main act... half of Draco and the Malfoys (and The Remus Lupins). He was totally geeky-cute-to-the-max. And he played "My Dad is Rich, You're Dad is Dead", which we all know is a modern-day classic. (and yes, that is the Elder Wand waving about in the foreground!) 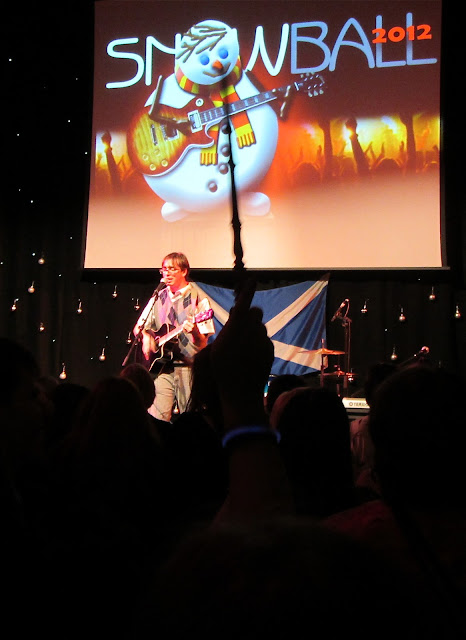 Wands at the ready... 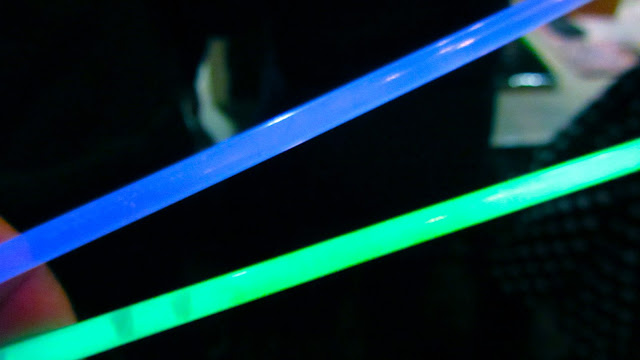 ...for Harry and the Potters! Brothers, Potter aficionados, and  founders of Wizard Rock! 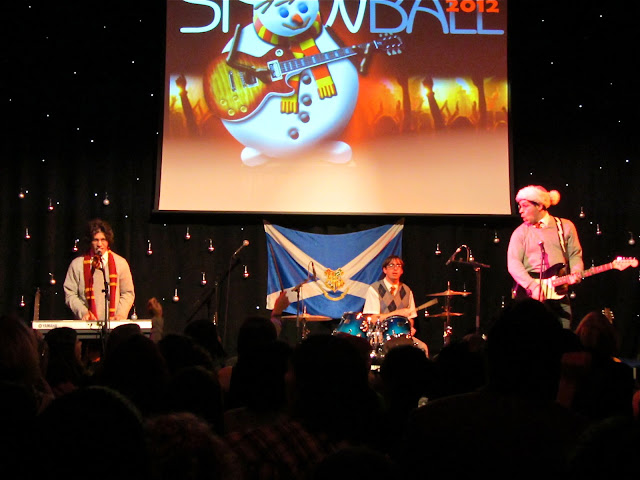 And they really do rock out. I didn't take much video (too busy dancing about) but I had to capture this one... Wizard's Chess is a little on the tame side compared to some of their other tunes, but its super cute  and it's about Christmas!
(Watch here, or if you want a bigger screen, choose to view it on YouTube. For some reason, Blogger won't let me show it any larger.)


Paul DeGeorge, Harry from Harry and the Potters, took some time before (and after) the show to have a little chat with me and Matt. I told him that we saw them play in Los Angeles years ago...twice. 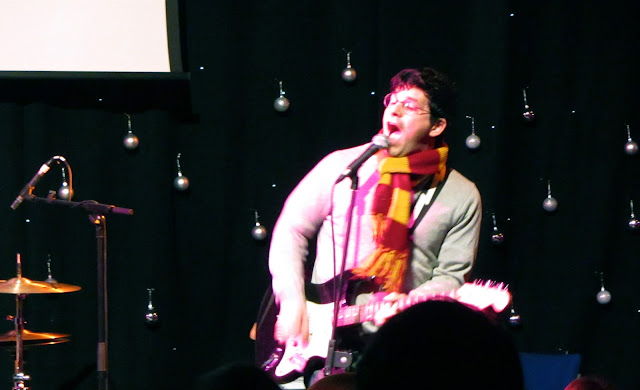 Here's younger brother Joe DeGeorge (also Harry, from Harry and the Potters) rocking out (*note the metal fingers in the foreground. yeah.) 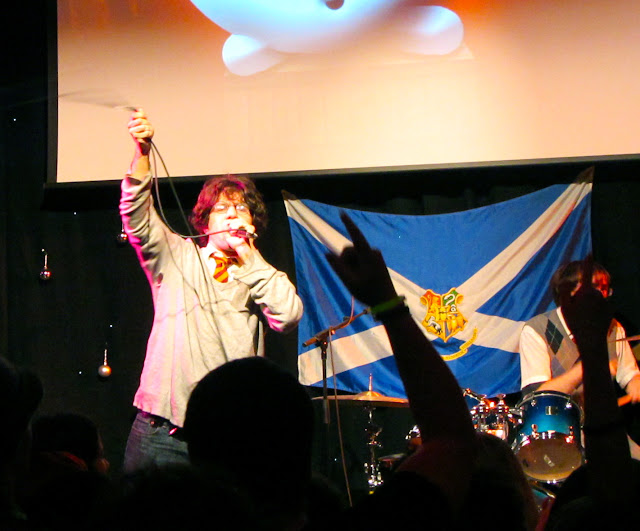 The guy from Draco and the Malfoys played drums for Harry and the Potters (I think he has also toured with the Violent Femmes... ) 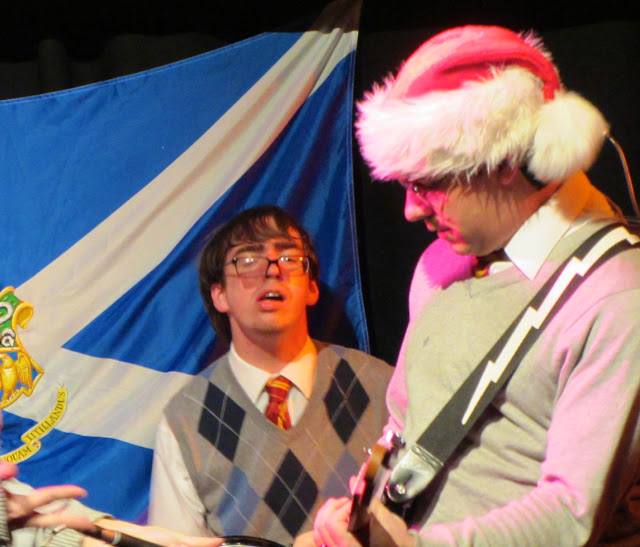 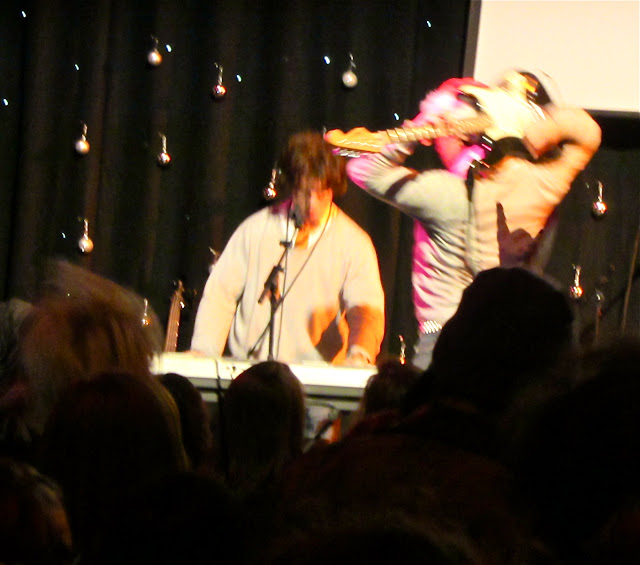 And toward the end of the night, in some impromptu show of togetherness, everyone in the audience held hands and swayed back and forth to the music. That's the thing about Potter fans... there is always a ton of love at these things ( I know... it sounds cheesy) but overall, I think the Potter books attract a kind of person who believes in the main theme of the book: That love is the greatest magic of all. 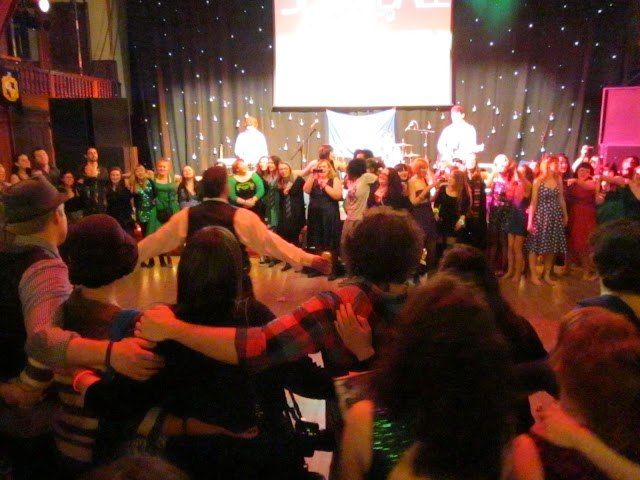