The Fellowship of the Ring

Matthew and I are reading another book together- one we have both been putting off for too long.  We are delving into Tolkein's classic,  Lord of the Rings.  Matthew had started it before, years ago, but didn't get into it enough to read it all the ay through.  I had never, until quite recently, expressed any interest in the fantasy genre.  My desire to read these books comes from my love of Harry Potter. For years I have listened to fans of both epics compare one to the other--or detail the points of obvious inspiration that JK Rowling got from Tolkien, and I guess I just got tired of having to sit out of the conversation.
Oddly, I really spent a lot of time considering if I should read this "trilogy".  I thought it would be best to watch the movies first-- as in sit down and pay attention and watch them all the way through-- and see if I enjoyed them.  Up until recently, I had seen the first hour and a half of the first movie, none of the second, and the last 45 minutes of the third movie. My brother claims that I had a knack for ruining some of the best films by "watching" them "half-assed".
So I watched. And I liked.  My favorite part of all three movies is the Shire seen at the beginning of the first film- after Bilbo's birthday celebration, I was sold.
But even then I didn't pick up the books, I needed to be sure that it was not just the story (or fantasy world) that I enjoyed, but the actual writing. I decided that before I read Lord of the Rings, I ought to read The Hobbit. (If only I put so much thoughtful consideration into the big decisions on my life! I think I thought about applying to law school for a total of 15 minutes). Matt and I read The Hobbit to each other (alright, Matt mostly read it to me...he's so much better at reading out loud!).  It was a perfect bedtime read.  The story was entertaining and the style was simple and fun. I read that Tolkein wrote it as a bedtime story for his own children. Once we finished it, and watched the animated film, there was nothing left to do, but tackle the story we had been putting off...
﻿ 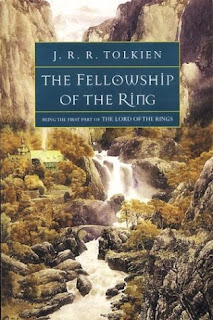 So far, it is a surprisingly easy read! For some reason I was expecting it to be dry and full of biblical-style histories, but it moves along and is truly a fantastic adventure.  Of course, we are only about half way through the first book, The Fellowship of the Ring, so I guess it is possible for the story to change pace. It is clearly a bit more sophisticated than The Hobbit, but this doesn't detract from the story. Rather, the opposite is true. The characters, the friendships, the setting, the danger--all seem much more developed in Fellowship.

And it is full of songs- just like The Hobbit! One of the best things in the world is to see your hubby have to make up a tune on the spot and belt out a song about 3 hobbits taking a bath together!


Sing hey! for the bath at close of day
that washes the weary mud away!
A loon is he that will not sing:
O! Water Hot is a noble thing!
O! Sweet is the sound of falling rain,
and the brook that leaps from hill to plain;
but better than rain or rippling streams
is Water Hot that smokes and steams.
O! Water cold we may pour at need
down a thirsty throat and be glad indeed;
but better is Beer if drink we lack,
and Water Hot poured down the back.
O! Water is fair that leaps on high
in a fountain white beneath the sky;
but never did fountain sound so sweet
as splashing Hot Water with my feet!
He delievered a top-notch performance that was one of a kind (since he can't remember the tune:). A few nights later, I rocked the Tom Bombadil song, if I do say so myself. And then had it stuck in m head for nearly a week! He is one of my favorite characters so far!

http://www.tolkienlibrary.com/press/Interview_Jos_Tolkien_Artist.php
Now we are reading the scenes at The Prancing Pony in Bree.  We have been introduced to Strider and the hobbits are deciding whether they will allow the ranger to accompany them to Rivendale... we wait until tonight to see what they choose; to face the perilous road alone with the Black Riders in persuit, or trust the ragged stranger, who seems to know too much about their quest, to lead them through the unknown territory!