My droves of readers from New Orleans, or Rio, or some other crazy-fun place, (or any Catholic, I suppose) already know that today is Fat Tuesday. The day to get in all your fun times before hunkering down for the next straight-laced and pleasure-free days of Lent.  I'm not Catholic, and I haven't been around a Carnival or Mardi Gras zone for many a year, so the whole shebang usually passes me by unnoticed...until this year. Because I have just found out that today-- Fat Tuesday, or Shrove Tuesday-- is also Pancake Day! 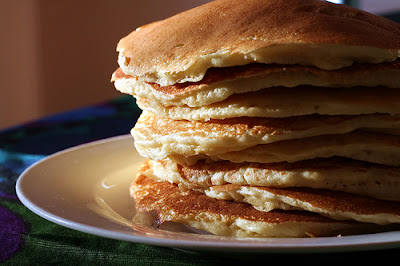 Today is often referred to as Pancake Day because fats, which were generally prohibited during Lent, had to be used up. People would take all the eggs and dairy products that they had left in their kitchens and use them to make delicious pancakes. And while I think I may have posted this a little too late for most of us to celebrate Pancake Day over breakfast, there is no rule prohibiting a nice pancake dinner, which is what I pan to have tonight! Even folks who don't have eggs or dairy products in their homes in the first place can join in the fun with this delicious vegan pancake recipe. 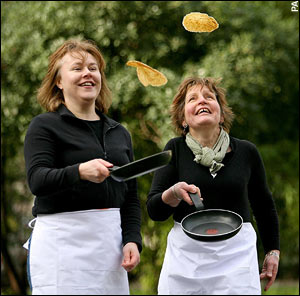 But wait...there's more to pancake day than just eating pancakes.  I found this on another site:
"In the United Kingdom of Great Britian, Northern Ireland and several other countries around the world, Pancake Day is celebrated with fun, games, and of course a lot of eating. However, the most well known activity on this day is the Pancake Day race at Olney in Buckinghamshire, England which has been held since 1445. It all began when a woman was cooking pancakes on Shrove Tuesday to use up all of her perishables before Lent. While she was still cooking she heard the chiming of the bells summoning her to church. Not wanting to be late, the woman ran to church with her apron on and the frying pan still in her hand. Little did she know that this would start a tradition that would be around for over 500 years! 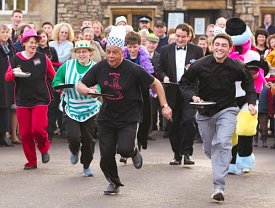 Only women were allowed to participate in this race. They must run a designated path with a frying pan and end up at the church. They must have a hot pancake in the frying pan which they must flip at least three times before they complete the race. The first woman to complete the race and arrive at church with the pancake is declared the winner. She then serves the pancake to the bellringer and is rewarded with a kiss from the bellringer called the “Kiss of peace”. This race still occurs in England and in several other cities."  More Info found here and here. 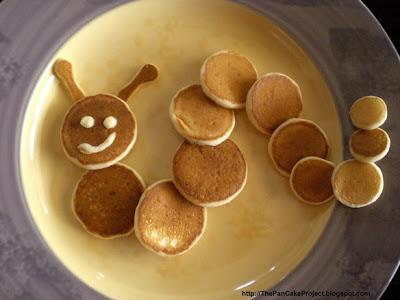 Even though I am not Catholic, and I do not plan to participate in the self-denial of lent, nor am I a resident of Olney in Buckinghamshire with races and games, I still plan on celebrating Pancake Day.  It seems like fun... and it has been a long time since I have had a pancake. So long ago, I can't remember it at all.

Pancakes for Everyone!
(Here at Dreams & Happy Things, we don't eat our animal friends... so the following list has been altered to reflect that. The list in its entirety can be found here).


BAO BING, PO-PING: The thin Mandarin pancakes served with moo shu. The cakes are made of fine wheat flour and boiling water, rolled thin and cooked two at a time.

BLINI: The savory, ultra-light pancake of Russia made traditionally with buckwheat flour and cooked in a small cast-iron pan. They date back to the Middle Ages

BLINTZ: The traditional pancake of Jewish cuisine is fried and rolled with sweet or savory fillings

CREPE: The French pancake is, of course, the thinnest of them all. Sweet or savory, crepes can be street food or served in a five-star restaurant. Crepes Suzette, once the epitome of luxury desserts, is doused with liqueur and set afire.

DADAR GUTUNG: This Indonesian pancake is wrapped around coconut meat cooked in water with brown sugar and flavored with lemon juice and cinnamon, with a little salt.

EIERKUCKAS: A rich pancake from the Alsace Lorraine region of Northeastern France. The batter is mixed with red currant jelly and cream.

INJERA: This spongy, yeasted pancake-like bread made from millet flour doubles as food and utensil in Ethiopia. One or two injera are placed on a large tray and then covered with various stews. Diners scoop the stew with torn pieces of extra injera. Lastly, the injera bread that lines the tray, soaked through with stew juices, is eaten.

LATKE: In Jewish cuisines, the crisp potato pancake is eaten with sour cream or applesauce.

PALASCINTA: A thin Hungarian pancake similar to and used like a French crepe. Also popular in Austria.

PANNEKOEKE: The basic Dutch pancake might be small and served as dessert, or large and dressed with molasses as an entree.

PIKELETS: A yeasted pancake with a holey surface in England. In New Zealand and Australia, the term refers to tiny pancakes that are served cold with preserves, whipped cream or lemon butter.

PLOYES: French Canadian sweet or savory buckwheat pancakes cooked on one side only.

POH PIA: In Singapore, these pancakes are served with a variety of filling and sauces for diners to choose from.

QATA-EF: In Egypt and Syria, these pancakes are cooked on one side, folded over a sweetened cheese or nut filling, then deep fried. Medieval Arabic cookbooks mention this dish.

TORTILLA: A thin pancake-like flatbread made of cornmeal or flour and water that dates back thousands of years in Mexico and Latin American cooking. 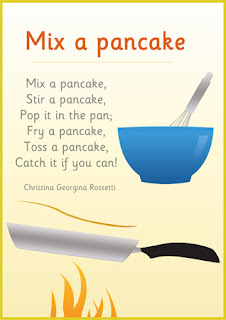 I must give credit where credit is due- and I found most of this blog post from the following sites:
Goddess of Random Thoughts is a wonderful blog devoted to storytelling and plays a wonderful set of songs that are fun to read to.  On her post on Pancake Day, Storysinger shares a link to another of her posts that has both a pancake recipe and a pancake themed folk tale.


I also used some info from Wikipedia (how did we ever manage without it?!) And that can be found here.


Lastly, I referenced this Catholic journal...and I took their picture of the delicious stack at the top of the post!


But I shall end on one of my most favorite pancake-themes pieces of art...

Happy Pancake Day to you all