Sometimes... you got to goof on your Dad a little. *

Up until I hit about 12 years old, most of my jokes at my dad's expense were based on the idea that he was old.**  You know how funny it is to make prehistoric references when you're in fourth grade... I cracked myself up with zingers like, "Hey Dad, when you were little, did you get really scared when you ran into a T-Rex?"

Actually, that still makes me chuckle a bit.

The teasing changed as I got older. Like most dads, mine gave me lots of material to work with over the years... his snail-paced driving style, his glasses with the bar across the forehead, and the fact that one of his favorite songs was this one.

But now, I've got something new to poke fun at... his fancy hair products! 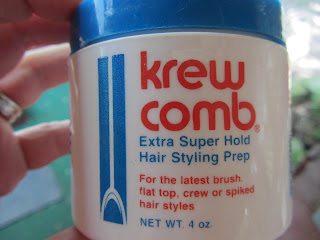 Krew Comb- so kool, it spells "crew" with a "k"! I'm not sure how he uses it, since his hair is quite short, but if he's ever at a loss on how to style his coiffure, he need only look to the back of the jar for suggestions!  Mohawks? Got it! Flat Tops? You bet.  It's even got the "latest female styles too!" 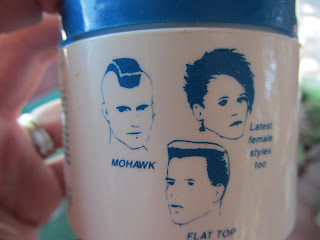 Let the goofing begin! I've just got to be careful that I don't over-do it, otherwise he'll just throw out the whole jar (like the car-freshener incident of 1995).****

Thanks for being a good sport Papa! I think I'll get you a switchblade comb next father's day!


* Don't worry... he pokes fun back!
** I'm realizing now that these jokes were made when my dad was in his 30s... which does not seems so old anymore ;) ouch!
*** I have grown to like much of Mr. Diamond's music, and have even rocked out to his cover band, Super Diamond... but I still maintain that Heartlight is pure cheese.
**** Don't worry Papa, I won't bring that up again!