Each year around January 25th, people gather round tables big and small and pay homage to the Bard of Scotland, Robert Burns.  The man lived only 37 years, but he left behind hundreds of poems and songs(and almost as many illigitimate children). The night is spent eating and drinking, laughing and toasting, reading and singing!
I had been wanting to attend a Buns Supper since I heard about them months ago, but they are not so common in my part of the world, so I decided to throw one.  Along with the help of my hubby and some good friends, our humble apartment was transformed- and we hosted a feast for 16! 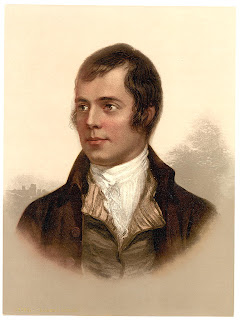 A traditional Burns Supper has a simple menu, and I stuck to as best as I could- with some major alteraltions.  The star of the evening was the haggis... Haggis is an intense dish to make even for the biggest of meat eaters, but for someone who has spent the last 20+ years as a vegetarian it is damn near impossible.  Luckily, there are many vegetarian recipes available online, so that's what I made.  As I told my guests- what we lack in authenticity, we'll regain in good karma.
Here's the recipe I based my veggie haggis on, but I did alter this one a bit as well...
http://allrecipes.com//Recipe/vegetarian-haggis/Detail.aspx
The haggis was accompanied by the traditional champit tatties and bashed neeps (mashed potatoes and rutabagas for us yankies). Followed by a desert of Tipsy Laird.  But the night was not really about the food.
The Scotch was a flowin'!Some might say too much, and some might say not enough. There was a whisky punch and whisky cocktails, and, of course, the straight whisky. http://www.visitdunkeld.com/whisky-drinks.htm Thanks to all of you who generously brought spirits to share. I developed a new appreciation for the good stuff ;) But the night was not really about the booze.
It was about the people! What a great group- I felt so lucky to have my home filled with such a group.  Most people did not know each other, but everyone got along.  Some of the guests I have know for years, and some I had met that night- but by the time we sang Auld Lang Syne (in the highest key possible...sorry) I felt that warm fuzzy feeling of friendship filling the room!
The photos below show some of our highlights. They may be blurry, fuzzy and slightly poorly lit, but they are filled with of fun and festivities! 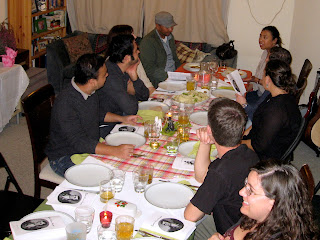 Great chieftain o' the puddin-race!
Aboon them a' ye tak your place,
Painch, tripe, or thairm:
Weel are ye wordy of a grace
As lang's my arm.

But Mousie,thou art no thy lane,
The best-laid schemes O mice and men
Gang aft agley.
An lea'e us nought but grief an pain,
For promis'd joy!

In proving foresight may be vain:
Fair fa' your honest, sonsie face,