We don't have internet in our new place, yet. And that has caused me to fall behind in all sorts of things, least of all, this blog. (Its a little sad how much I depend on the interwebs!) But, I've brought my trusty laptop to my local branch of the library and I'm all set and ready to post.

That said, I don't have any time or patience for a particularly thoughtful post. I do have a few in the works, I promise. Posts that are more than "this is what we've been up to" and "look at the pictures". But for now, that's exactly the kind of post I've got to share. I'm going to blame the following lazy post on my sore throat and achy body. It's barely autumn and I already have a cold. (It might be a loooong winter!)

But don't let my general grumpiness fool you, we've been having a great time. Really! Each day we discover something new- some days is a medieval chapel, other days its a good place to buy cheap towels- events which, sadly, caused me to feel nearly equal amounts of excitement.

So, feast your eyes on the following pictures showing what we've been doing with our days, and know that I'll be adding a little more substance to my posts in the very near future! 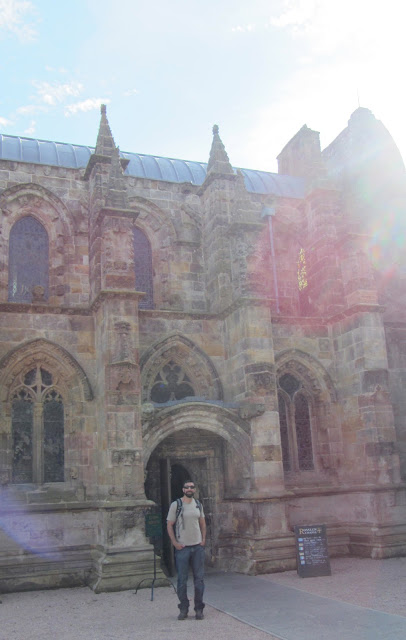 One day, we went to Roslyn, and disregard my previous comment comparing the experience to buying towels, because this place is all together otherworldly. Photos are not permitted inside the chapel, so you'll just have to come visit it yourself to see what I mean. It is intricately carved- almost every inch of it- with flowers and stars and figures of angels and musicians (there is even a piper!). Most of these carvings have some mysterious connection to the Masons, or the Knights Templar, or the Holy Grail, or... well, the list goes on and on.

The area surrounding Roslyn is beautiful, and mysterious in its own way. We spent some time following the advice of Sir Walter Scott... hiking in the woods, exploring the old castle and delighting in it all. 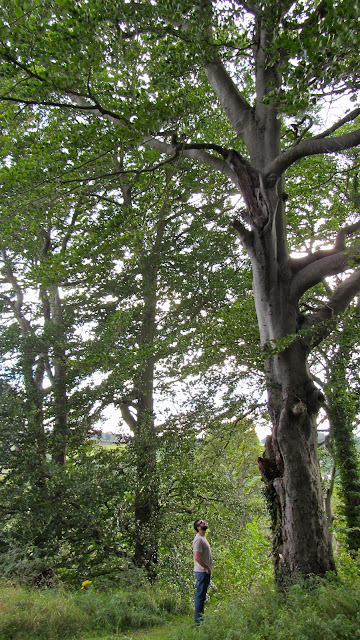 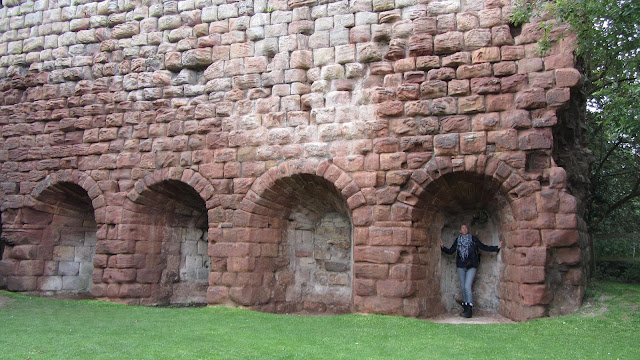 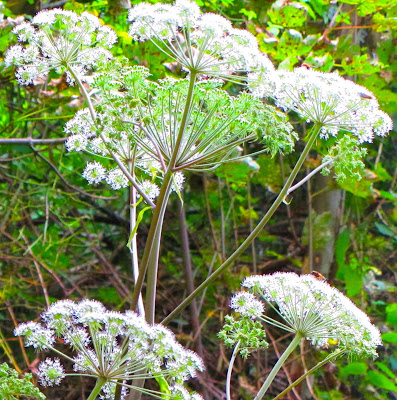 Another day, we headed to the Scottish Parliament  building. It has a strange yet inviting design, and it is neighbor to both Holyrood Palace and Arthur's Seat. We did not take the tour, but we will one day. I picked up a pamphlet that outlines the powers of the Scottish Parliament and its relationship to the Parliament of the United Kingdom at Westminster. Which answered a lot of questions Matt had been asking me (as if I somehow know about these things!) 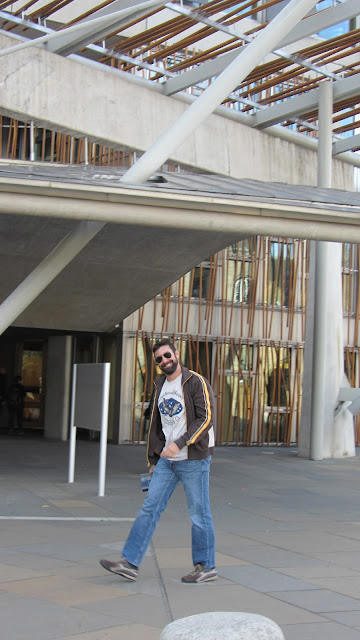 Inside the lobby area, placed in lighted display cases, are gifts that foreign governments have given to Scotland. It is usually something significant to the giver's culture. There were beautiful pieces of art and pottery, things made from jade, or glass beads, and ancient-looking carvings. From the US, there was, what looked like, a white candy dish. I couldn't help but feel a bit underwhelmed. C'mon, America!

But our visit was more than just checking out the local government and seeing foreign bric-a-brac, we wanted to see the William Wallace Letters exhibit, before it headed out of town. The exhibit was small, but beautiful. And if your only understanding of William Wallace comes from the movie Braveheart, as mine did, you'd probably find it very informative.
On a different day, we strolled down a particularly lovely footpath, where people walked their dogs and pushed their baby buggies without the worry of traffic. Along this path, we found several hills of allotment gardens. What wonderful, wonderful sites! They looked like their own little towns, where all the citizens are veggies and fruits and flowers. Only my strong will (and the 6 foot stone wall) kept me from running through the plots trying to claim one as my own! 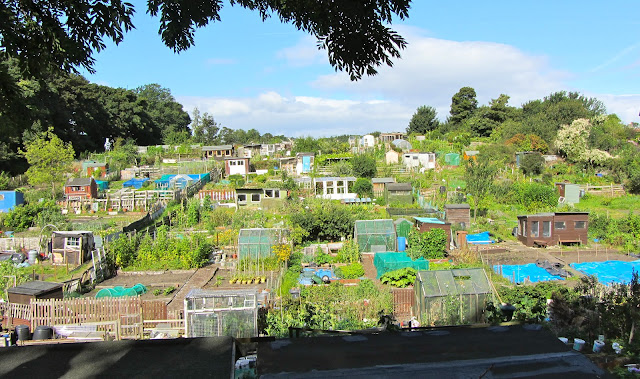 And maybe later that day, or another day altogether, I had my first ginger beer. It's alcoholic, but mildly so, and it has the same bite to it as a quality (nonalcoholic) ginger ale. Since this first one, I've had a few others. I think my favorite is the one with Gimli on the label. 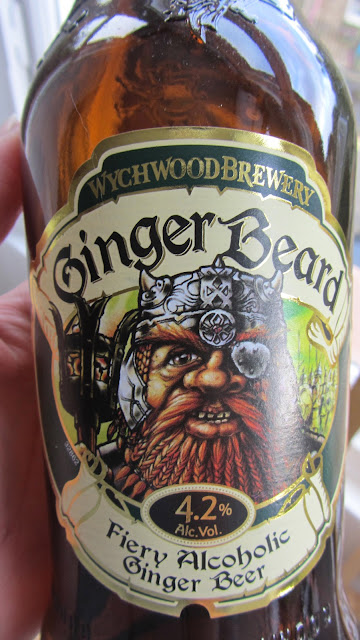 On one of our many nights out to dinner, we got burritos. Our first Scottish burritos. They weren't fantastic, but they weren't bad (I had heard not to expect much when it came to Mexican cuisine in the UK). And, they came with instructions- which, as burrito-eating experts, we did not need. Obviously. 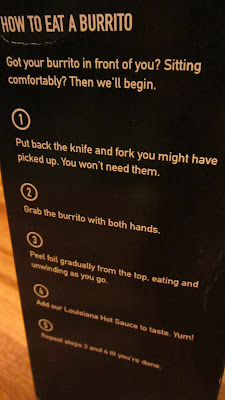 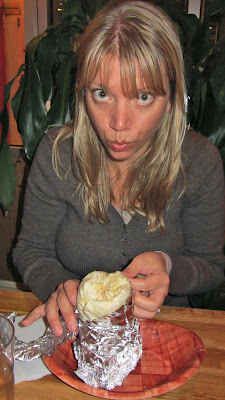 What else...? Oh, one day, we took the train to South Queensferry and we followed this awesome trail to get from the train station to the town. It was covered in blackberry brambles and long wooden steps... I was a bit behind Matthew when I got out the camera and yelled, "hey, Matt!" and instead of turning around to pose (he knows what that kind of "hey, Matt!" means) he just gave me the "whoo-hoo" arms and continued running down the stairs. 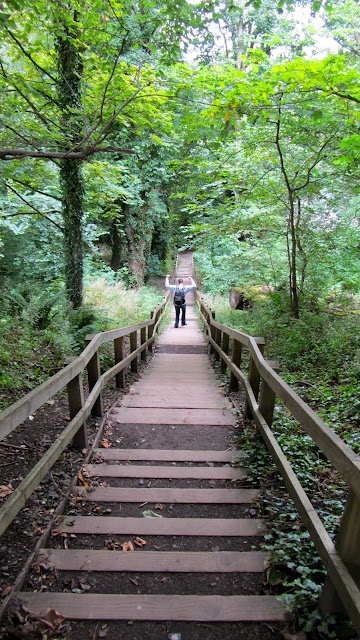 Other than that, we've spent our days and our nights just hanging around Edinburgh, getting used to sites like this one: 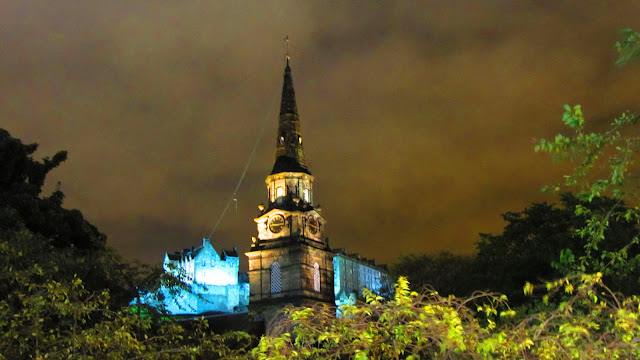 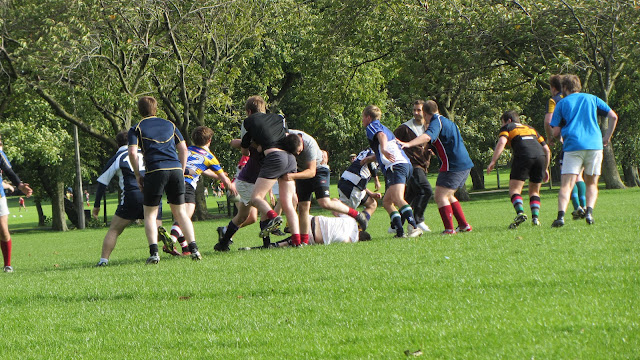 Oh, and I almost forgot, one day, we moved! We are tenants, with a real home address and house keys and all! 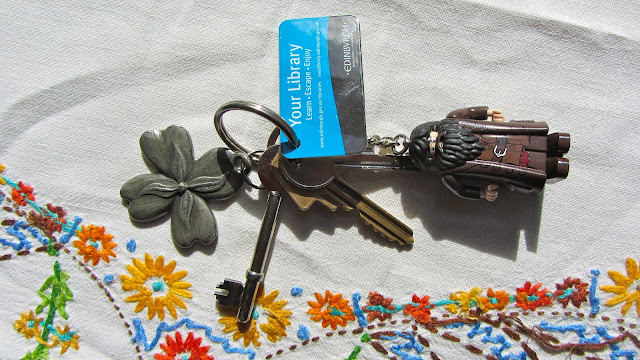 The move itself might warrant its own post, but here you can see the guys taking in their new place... 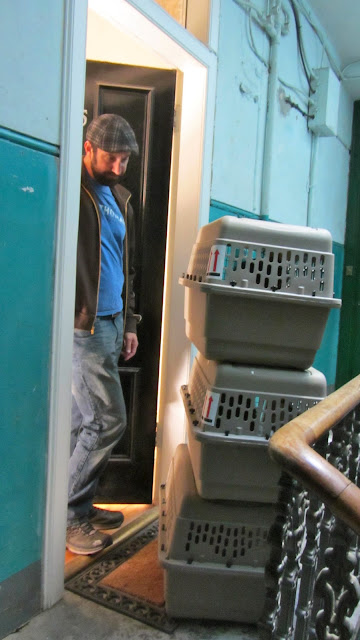 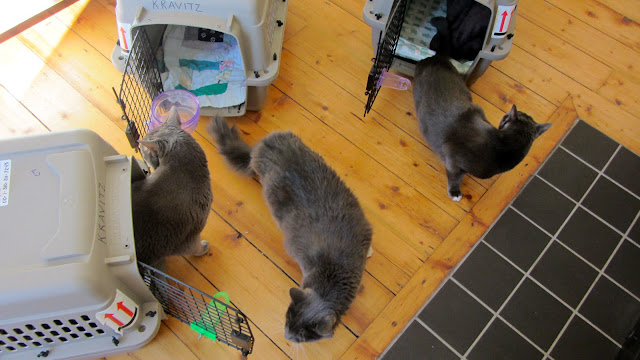 Where we moved to is called Leith. And, (We) 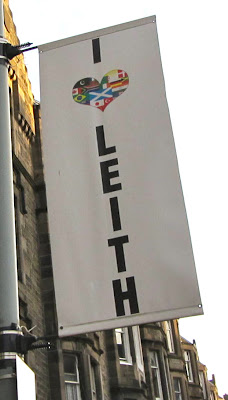 Because it is pretty, and a bit gritty and has a little more flavor than the neighborhood we were in before (which we do miss already, but was, undoubtedly, vanilla). 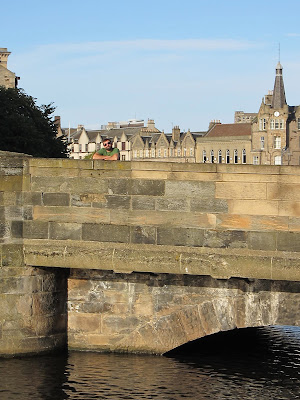 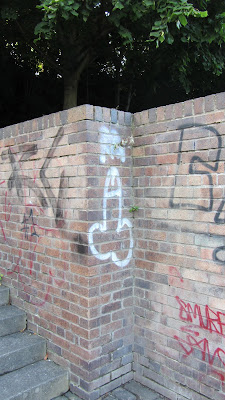 And just last night, I saw the moon rise outside of our new bedroom window and there was the strangest look to it. I don't know if it was just a reflection from the clouds, or from my rainy window, but it looked like there were two moons! You can't really tell in this picture... 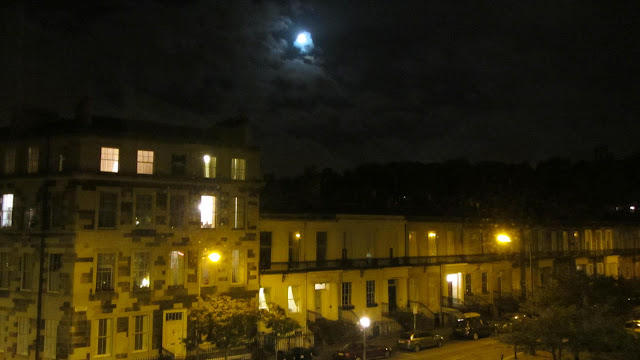 But this one shows what I saw a little bit better. What is that all about? 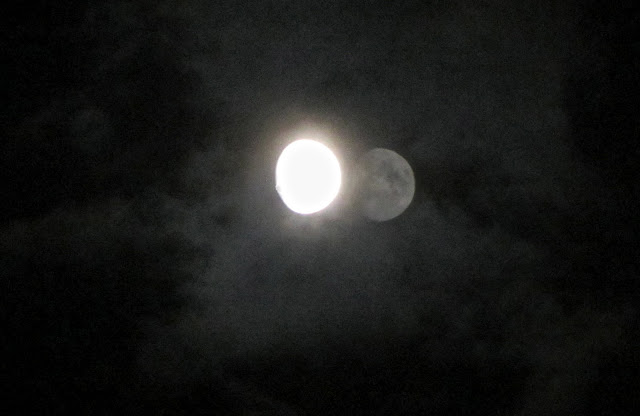