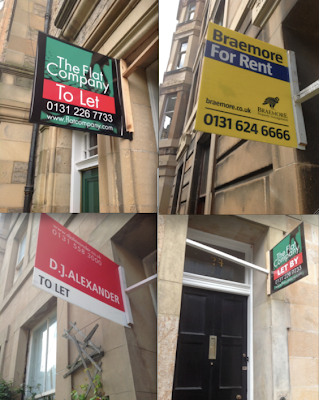 OK. It's time. We've been in our permanent flat for nearly a month now, and I think I can finally share with you all the hellish experience that is flat hunting in Edinburgh.

We came to Edinburgh toward the end of August, when the city is literally bursting at its seams with tourists, fire-eaters, poets, tourists, comedians, musicians, students, tourists, unicyclists and tourists. August is the month of the festival here in Edinburgh, and it is a wonderful time- as far as I could tell (I look forward to next year when we are settled and can really get out there and see what the festival has to offer). It is also an incredibly crazy time to make Edinburgh your new home.

But it wasn't really the festival that made flat hunting so gosh darn frustrating. It was really the influx of students. Foreign students for the most part (as many local students already had their flats sorted our well before August). There were so many of them! We couldn't really fuss about that though, considering... because of the whole we are foreign and Matt's a student, thing.

So, we were just another couple scrambling to get the exact same thing that everyone else wanted: an affordable flat with Scottish charm that was close to the university and available immediately. Oh, and on top of that, ours had to accept cats.

Pickings were slim. We ended up grabbing a great little flat, so it all has a happy ending, but the process- oh! the process!- what. a. nightmare.

But, live and learn. If I could do it over again (and I'm glad I don't have to for  a while, at least) I'd do things differently. Here's a few tips to help out anyone out there who may find themselves in the future flat hunting in Edinburgh:

1. You MUST have a local phone. First thing you do when you get here is get a cheapy "top up" mobile at any phone shop. They cost about 10 pounds and you can add money to your account as you use it up, and you will use it up, several times, because you will be making lots of calls.

2. Those letting agent signs on the outside of buildings...? The ones that hang off the exact building you so want to live in? Like the ones at the top of this post? FORGET about them. Those places have been rented out months ago. Or they are not available for months yet. Or the agents whose name and number is emblazoned across them have no record of any flat at that building. Or... on the off chance that there is a flat, the agent knows what you are talking about, and it is available, it likely has 5 bedrooms and costs a small fortune each month in rent. This was our biggest bummer of all, because they would beckon to us, and we'd fall for them every time.

3. Letting agents in general are a bit strange here, at least compared to my experiences renting in America. First off, they don't seem too interested in actually letting their flats. Our calls were often met with friendly but unhelpful desk agents that couldn't really tell us much about what was available or how/when we could arrange a viewing. In this market, I don't think much effort was needed to get flats rented out, and that was a bit apparent.

4. But, we did get a few viewing appointments from agents. And we missed a couple of them. So listen up... if you want to see a flat, and you get an appointment to see said flat, DONT BE EVEN ONE MINUTE LATE! If the appointment is at 11:45 and you show up at 11:46, it's over. You blew it. Seriously. The agent can be late, but you can't. They'll have booked another showing at another flat at 11:50 and they ain't staying around for a second to wait for you. This doesn't sound like that big of a deal- be on time. However, it's pretty easy to run late when you are new to a city, and you don't know exactly where to go, or what bus to take (even though you plotted it all out online before you left your temporary flat...) and all of the streets have 900 different names depending on what block you're on, or you've found Cluny Garden but you can't find Cluny Terrace, and you keep passing Cluny Crescent which is right off of Cluny Road... 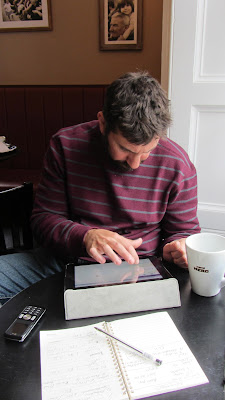 5. If you can, have a gadget that allows you to go online. We had to refer to our iPad several times for directions, for phone numbers, for up to the minute listings...

6. Make lists. Frustratingly useless lists, of all the places you find online, or in letting agent windows, (or from the letting signs that hang off of the buildings as mentioned above, if you want to add to the heartache) because every flat begins to be the exact same in your head. And if you happen to get a call back from one of the hundreds of messages you left with various agents, you got to be able to know what flat they are talking about. Our list included the flat street, agent, phone number, price per month, # of bedrooms, and date of availability. Even then, we were not always sure which was which! 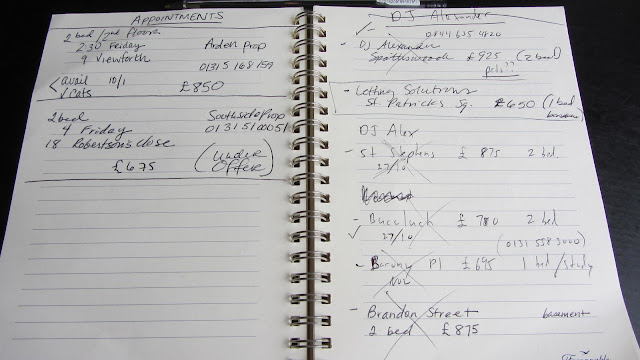 7. Cross things off the list as soon as you know that the flat is gone, because otherwise, you just might keep hoping... 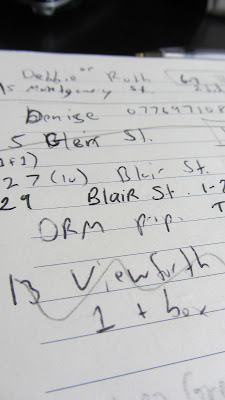 8. Be prepared to pull the trigger quickly if you find a place you like even a little bit. We let a couple slip through our fingers by mulling it over for an afternoon. The flats go that fast. Also, some agents require you put down money to apply- a sizable chunk. One agent wanted us to give 200 pounds per person (over 600 USD) that we would lose if our application was accepted and we decided to go with another flat. They return it if you are not accepted though, but it does make it easy for them to consider multiple tenants while you have to commit to applying to only one flat.

9. You might want to forget the letting agents all together and go with a private landlord. We did, and it was the only time we felt sane during the whole letting process. Private landlords can run the gamut and our is pretty relaxed. And most private landlords are registered with the government (some sort of registry or license I believe to protect letters) so there is an added level of comfort there. We found our flat on Gumtree (kind of like Craigslist).

10. Lastly, remember that this is all part of the adventure. There is a certain cultural distinction between Americans and folks on this side of the pond that I find both endearing and infuriating. The people we dealt with during our flat search were all so polite, but so reluctant to supply any information that isn't explicitly asked for. And instead of getting right down to the point of the matter, there is a lot of side stepping and dead-ended conversations. I couldn't help but think of this sketch from Monty Python during our entire flat hunting experience: