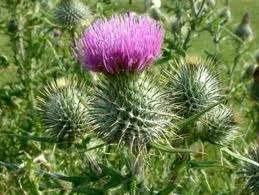 "The thistle is a thorny flower that grows wild in Scotland, and legend has it that it became the national emblem of Scotland after the Battle of Largs in 1236AD.  A Norse attack force had decided on a stealthy night attack. However, their leader trod on a thistle and his yell alerted the Scots, who under their king, Alexander III, routed them. This battle led to the ending of the Norse occupation of western Scotland.

The thistle is not a useful plant, but it is tough and prickly, and it became a popular badge in Scotland. While the Lion Rampant flag was grand and the Saltire Flag hallowed by long tradition, the homely thistle was something everyone could identify with.

To the Scots it was a reminder that their country might not be the most rich or fertile but, equally, it was not grasped lightly."