I'll admit it, I brought this little jar of goo home from England because it was just so... English. I didn't really intend on using it, probably beacuse I had no clue how to use it. I heard some people spread it on bread, others with veggies, and some people just drank it down mixed with a cup of hot water.

For me, it was a souvenir--along with lemon curd and HP sauce (I like to bring home edibles :) I stashed it away in my pantry, until a recipe I wanted to try actually called for a teaspoon of it.  I opened up the jar and was surprised! This suff is as thick as tar! I tasted a tiny tad, and it was salty and sour and totally foreign. BUT, I put it in the recipe like it said and everything turned out good.  In fact, I think it turned out better than good, the Marmite made it great.

Since then, I've thrown it into mixes and mashes when I am cooking without a recipe.  Last night, I put it in my Shepheard's pie mix and it was great! So now I'm a fan. This totally unique mystery goo is really very useful. And I've just found out it's healthy! Bonus! 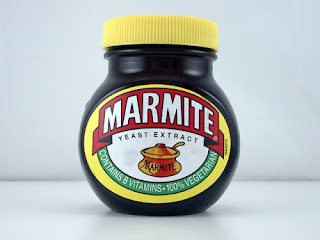 For more than you ever wanted to know about Marmite, visit:
http://en.wikipedia.org/wiki/Marmite
And to see their very clever ad campaign, visit:
http://www.marmite.com/