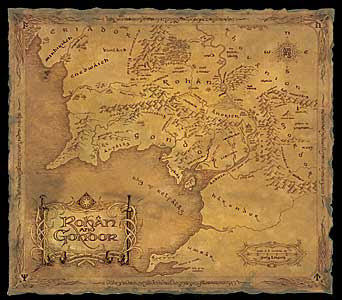 Matt and I have finally finished the second book in the Lord of the Rings 'trilogy', The Two Towers. There were a few parts that were fun and magical, but for the most part, the story, and the act of reading it, felt long and arduous. Like Frodo and Sam, and the others in the fellowship, I found myself recalling better times from the first leg of the journey. (If you'd like to read my shorter and sweeter 'synopsis of The Fellowship of the Ring, it is here.)

In this book, we hear Boromir's horn, and find him after he has been attacked by orc, but before death. He confides in us that he tried to take the ring, and also that the other halflings were kidnapped. We promise to defend Minas Tirith and then send him down the river in a funeral boat. We decide which halflings to persue, and start on foot to find and hew some orcs.

We who are kidnapped, are tied and dragged along side a large company of orcs. We have little water, and won't eat the horrible meats. When our captors are attacked by the Riders of Rohan, the Rohirrim, we escape into the forest of Fangorn and enjoy its restorative waters, but fear the darkness and old growth. We meet Treebeard, aka Fangorn, the oldest of the giant Ents. He asks us about the Entwives. He knows of Gandolf. We listen as the Ent council decides if they should get involved in the terrible goings on at Orthanc. We celebrate that they decide to take action against Sarumon.

Meanwhile, we who are pursuing the orcs who captured two of our company meet the Riders of Rohan, and Eomer. We learn that the Riders attacked the orcs and left no survivers. We feel terrible, but must see for ourselves. We go to the battle sight, we see burning orc corpses, and also tiny footprints that lead into the forest. We also see an old man, who disappears, and he creeps us out. We head into the forest and we meet the old man again. He is still creepy, we think he is Sarumon but he is not. He is GANDALF! We rejoice. We listen to him tell about his battle with the Balrog and his resurrection. He tells us to forget the pursuit of the halflings and to go with him to Edoras. We do. We have to leave our weapons outside as we meet King Theoden in his great hall. We watch Gandalf rid the King of Sarumon's spy,  Grima Wormtongue. We ride with Theoden's troops to Hornburg, in Helm's Deep. We lose Gandalf again (he's busy). We fight hard against Sarumon's orcs. We are losing, and Gandalf returns with backup and we win. Then we head to Isengard.

We, the pursuers and warriors, are united with us, the once-captured halflings. We tell each other our tales, as Gandalf finishes what the Ents started and destroys Orthanc. Sarumon is given a chance to repent, but does not take it, so he is to be sorted out by the Wizard's council. Grima throws something out the window trying hit Gandalf, but it misses and we got to retrieve it. We like it, it is a pretty glass ball (a plantiri) and later that night, we look in it and see bad things, including the eye of Sauron. Gandalf yells at us, and then puts us on the back of Shadowfax and rides us away from the others. Everyone plans to meet again in Gondor, where a big war is a-brewin'.


MEANWHILE:
We ringbearers set out for Mordor and captured Gollum allong the way. We use him as a guide. We travel through the Dead Marshes. We are weary. We are scared. We are hungry. We see the Black Gate but it's too heavily guarded to enter. We decide to go another way. We walk and walk and walk. We fell the burden of the Ring. We switch between hating and pitying Gollum. We encounter a group of men, Gondorian rangers led by Faramir, Boromir's brother. We are blindfolded and taken to their hidden camp inside the mountain. We eat. We drink. We find out Boromir is dead. We worry about the rest of the company. We trust Faramir, we tell him about the Ring and our burden to destroy it. We save Gollum's life.

We leave the men, and continue with Gollum as our guide. We pass the dark city of Minas Morgal and up the steep staircase of the Tower of Cirith Ungol. We have to travel through a dark passage way. We smell the worst smell. We are abandoned by Gollum and attacked by Shelob. We get stung. We attack the great spider and fend of Gollum's attack, and discover he had planned this. We assume Frodo is dead. We decide to finish the quest and destroy the Ring. We head toward the tower and hear orcs. We watch the orc find Frodo and hear them say he's not dead. We kick ourselves. We follow the orcs and vow to rescue Frodo and return the Ring to him, so that we may finish the quest as planned.