Strolling through any Borders or B&N, book shoppers will come across countless covers depicting the undead. (Are Borders and B&N even still around??) When did zombies become legitimate literary players? Or am I just loose with what I am calling literature?  :) Seems to me, that these books are rising up all over the place, and what great fun! I've only read one of the titles below, but the other two are on my "to read" list.
Alice in Zombieland 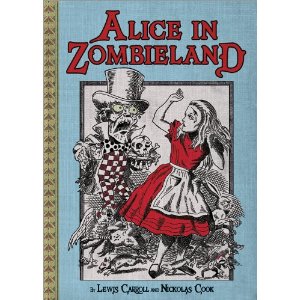 They were indeed a queer-looking party that assembled on the bank-the birds with draggled feathers, the animals with their fur clinging close to them, and all dripping wet, cross, and uncomfortable. All of them were covered in Alice's now cold and congealed blood, which made them even tastier looking to poor hungry Alice.
When little Alice follows the Black Rat down into the gaping darkness of an open grave, she falls and falls. And soon finds herself in an undead nightmare of rotting flesh and insanity. Venturing further into this land of zombies and monsters, she encounters characters both creepy and madcap along the way. But there's something else troubling poor Alice: her skin is rotting and her hair is falling out. She's cold. And she has the haunting feeling that if she remains in Zombieland any longer, she might never leave.
Can Alice escape Zombieland before the Dead Red Queen catches up to her?

Pride and Prejudice and Zombies 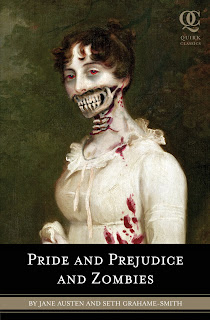 (I have blogged about this book before, here!)
“It is a truth universally acknowledged that a zombie in possession of brains must be in want of more brains.”


So begins Pride and Prejudice and Zombies, an expanded edition of the beloved Jane Austen novel featuring all-new scenes of bone-crunching zombie mayhem. As our story opens, a mysterious plague has fallen upon the quiet English village of Meryton—and the dead are returning to life! Feisty heroine Elizabeth Bennet is determined to wipe out the zombie menace, but she’s soon distracted by the arrival of the haughty and arrogant Mr. Darcy. What ensues is a delightful comedy of manners with plenty of civilized sparring between the two young lovers—and even more violent sparring on the blood-soaked battlefield. Can Elizabeth vanquish the spawn of Satan? And overcome the social prejudices of the class-conscious landed gentry? Complete with romance, heartbreak, swordfights, cannibalism, and thousands of rotting corpses, Pride and Prejudice and Zombies transforms a masterpiece of world literature into something you’d actually want to read.

The Zombie Survival Guide is your key to survival against the hordes of undead who may be stalking you right now. Fully illustrated and exhaustively comprehensive, this book covers everything you need to know, including how to understand zombie physiology and behavior, the most effective defense tactics and weaponry, ways to outfit your home for a long siege, and how to survive and adapt in any territory or terrain.
Lessons for Surviving a Zombie Attack
Want more books on zombies? Here is a list of titles.
*The text accompanying each title is from the publishers, they are not my own words (especially the last line describing Pride & Prejudice & Zombies... I would never imply that the classic is not a fun read :)