The Alchemyst: The Secrets of the Immortal Nicholas Flamel by Michael Scott 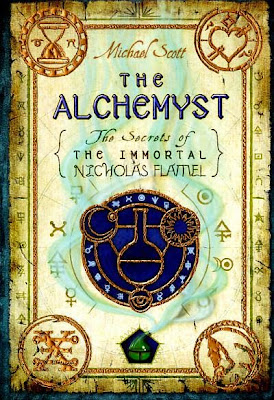 I came across this book in a used bookshop, without a dust cover and all alone with no other books by the same author. It was shelved in the YA section beside the writings of JK Rowling and it mentioned Nicholas Flamel in its title, so I had to give it a looksy.  Having never heard of it, a it being without a front or back flap to tell me a thing about the story, I purchased it based on the 'magical' symbol etched into the hard cover. I brought it home and let it sit, undisturbed, in my bookcase for months.

But last week, I picked it up and read it in a day or two. About midway through, I did a quick search on the book and its author and found out that it is the first of a long and pretty popular series. And I realized... I don't know a thing about this genre! I might need to continue on in the story, so a visit to my library is likely in my near future...

In a nutshell, The Alchemyst is the story of two 'normal' human siblings, twins, actually, that find themselves mixed up in a battle between the guardians of an ancient magical codex-- the immortal Flamel and his wife, Perenel-- and the Dark Elders who have lived in exile since the dawn of the iron age and want to return to this realm.

And like I always say every time I mention a book I've recently read on this blog-- I am not a book reviewer. I will however, tell you a couple of things that I liked about this one...

1. The magic is subtle - There are no magic wands to cast spells :( but that doesn't make the magic fun to read. Kudos to author, Michael Scott (sadly he has the same name as the character from The Office...). His characters train to gain hypersensitivity to their surroundings and tap into their auric energy in order to perform magic. Also, there is a great distinction between sorcery(which is what I am loosely calling magic) and alchemy (which I am guessing will come into play more later in the series).

2. The mix of real towns and cities and magical locations - The story begins in San Francisco, travels to Mill Valley and Ojai, (all beautiful California locations of which I am familiar) and then ends on a "what-will-happen-next" kind of moment in Paris, France. In between all of these locales, the story takes readers into the Shadow Realm of various dark elders... Its fun to keep on foot in a magic land and another in the 'real world'.

3. The use of myths and legends - This is the coolest part of the series. I get to read about Nicholas Flamel... and Scott bases it all on real facts, rumors and tales. In this book, readers meet the Morrigan, the Bastet, John Dee, Scathach, Perenel, Hekate, and the book ends with a glimpse of a certain legendary Italian author who caused quite a splash in the 1500s before his death... that is, if he died at all....

But of course, there were a few things I didn't like, too

1. The story is simple - Too simple. I know it is meant for kids, but that doesn't mean it has to be so straight forward and linear. There isn't a whole lot brewing at once other than the action at hand, and so when Scott does sprinkle in a bit of foreshadowing, it stand outs and makes for fairly predictable reading. I found this to be the case in the Percy Jackson books as well. I think I was spoiled by having the Harry Potter series as my very first foray into both children's literature and the fantasy genre... now  I hope for every subsequent book to take me on an equally complicated and exciting journey. So far, The Alchemyst does not (but I have only finished the first book of the series... so perhaps I'll be proven wrong as I read on).

2. The overuse of certain phrases or ideas -  The heroes are twins. They have the special bond that only twins can have. They know what each other are thinking with just a glance. They worry for one another more than any other pair of siblings ever have in the history of the world. I got that after the first few pages, but Scott really drives it home in every chapter. Again, to be fair, I am reading a book that was intended for a different audience. Perhaps at the YA reading level repetition is more important. I had the same complaint with the Twilight series. How many times did Bella shiver when Edward looked at her? If it were a drinking game, readers would be sloshed by Chapter 3... especially young adult readers. Their tolerance for liquor is notoriously low- Kidding!

3. Not really connected with the heroes - So far, I don't really care much for the twins. I've forgotten their names and I just finished the book! Yikes, shows you my level of investment. Perhaps they will develop into more complicated and relatable characters as the books progress, but they are a far cry from Harry, Ron & Hermione... They are less formed than Percy, Annabeth and Grover (I didn't have to look up their names and I read The Lightening Thief over 6 months ago...).

So I guess I did end up giving a review of sorts. And I will probably read the next book in the series. It's not a big time investment and I must say that I am quite curious to see how the foursome gets out of the basement of Sacre Coeur... Oops! I've said too much!