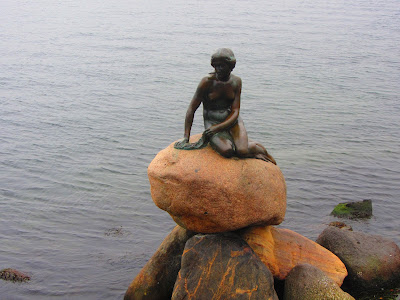 Since we're in the middle of a giveaway from the Filigree... a Mermaid Extravaganza, actually, I thought it is only appropriate that I post a few pictures from my recent visit to the Little Mermaid sculpture in Copenhagen.

As my guide said before we approached her, "she's just a little thing'. I guess many American tourists expect her to be on par with the Statue of Liberty, size wise, and that she is not. Her smaller stature makes her seem more life-like, more vulnerable, more little- which is a better fit with the original story.

The title character from Hans Christian Andersen's beloved tale has seen many representations since she swam into the world in 1837, the most popular in recent years being Disney's Ariel. Ah, Ariel. Don't get me wrong, I'm a fan of this version, and I love that everyone is happy in the end, but of course, that's not what Andersen intended. If you don't know the real story, or if you need a refresher, the original in it's entirety can be found here.

One of my favorite things as a child was my set of Superscope Story Teller books and cassettes. This version of The Little Mermaid was abridged, but it still stuck to Andersen's plot line- the Grandmother, the sister's hair, the knife in the heart, the sea foam, the sorrowful end.... I can still hear the sister's voices encouraging the Little Mermaid to come back to them under the sea. 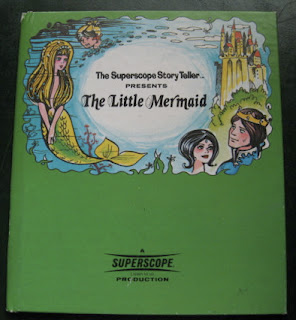 The statue in Copenhagen captures the old story wonderfully. She is a little sad, sitting there on that rock. She is beautiful and exposed and without defenses. She enchants visitors, some of whom just pose next to her to snap a quick photo, and others who sit for a while and gaze at the rocks as she does. She thrills the little ones, especially the girls, who know some version of her tale... and I know of at least one visitor who saw her and pitied her for wanting to be something she was not, but admired her anyway, for trying. 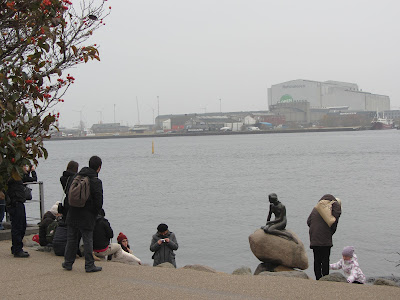