I finally got to catch up with some of my favorite people, aka Charlie and his family.  Due to the holidays, busy schedules and a nasty cold that took its turn with each of us, it had been way too long since we all got together.  But last Saturday we took a little time and spend a lovely afternoon shopping and playing.

We started out at the Farmer's Market, and after a bit of browsing we got lunch. Charlie was a very patient boy as he waiting for our salads and paninis (which took for-ev-er, but were very tasty). He definately likes to people watch (like his mom) but gets a little fussy once he starts to get bored (like his mom :-)

We stopped into a few shops but Charlie didn't find too many things to buy. He considered getting one of the full length mirrors from the Nordstrom's men's department, but it wasn't for sale. Too bad, because it really entertained him for a while. Before we left, Charlie made friends with a friendly purse salesman with a fauxhawk. 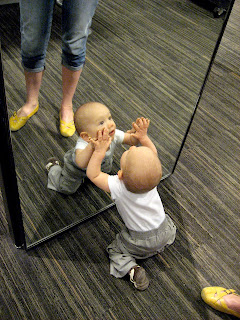 After all this shopping we all needed a little outdoor break.  Matty and I stole Charlie away to the grassy area by the dancing fountains and forced his parents to wonder around a bit on their own.  The three of us played--first pulling up tiny fistfulls of grass and then a spirited game of pass the yellow ring.  Charlie was a little disturbed by Matt's beard.  He played with Matt fine, but he didn't want the beard too close to him, and he recoiled from touching it.  (I think Charlie's reaction motivated Matt to buy and use beard clippers, which he did later Saturday night!)  Charlie and I did some jumping--I held him and he did half the work and I lifted him the rest of the way up, up, up. Boy does that get him smiling! But I do not have his stamina... it was quite a workout for my arms and shoulders.  No wonder Charlie's parents are in such good shape!
﻿ 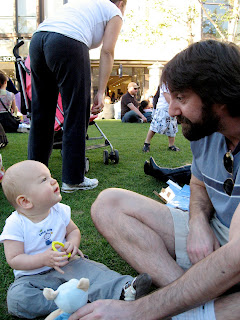 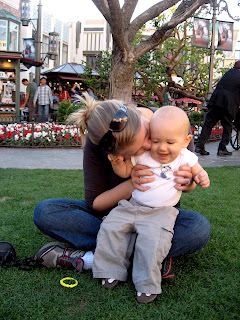 ﻿
Soon Charlie's mom and dad joined us on the grass, and I took this picture of the whole darling family. Charlie is such a lucky boy to have these two for parents, and they are pretty lucky too. As Matt and I said as we drove home, they don't make babies any sweeter than Charlie!﻿ 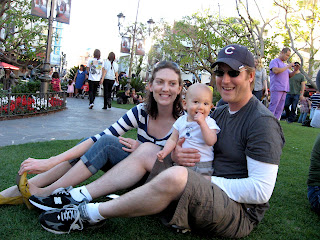