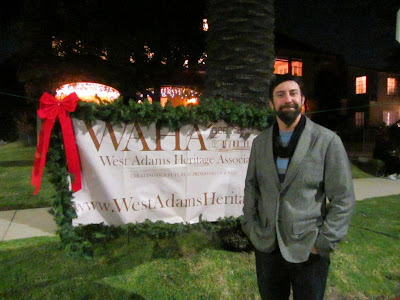 My hubby surprised me with a wonderful date night. He took me to a progressive dinner in one of the oldest and most affluent neighborhoods in Los Angeles, Lafayette Square. It was something I mentioned I would love to do back in June, and while I forgot all about it, he remembered. And he got us all signed up. And without even a hint as to what we were doing, last Saturday night he drove me past the iron gates onto a wide boulevard lined with trees and historic mansions- all glittering with holiday lights. And said, "some folks are having us over for dinner!"
The event was organized through WAHA, the West Adams Heritage Association, a group that has welcomed us with open arms since we moved into the neighborhood. West Adams covers a large portion of Los Angeles just west of downtown and while parts of it are in need of some TLC, Lafayette Square is not. It is more glamorous that most of Beverly Hills! Each house is more beautiful than the last and the best thing is that there is a mix of styles that makes the neighborhood look anything but cookie-cutter. Craftsman, Tudor, Modern, Spanish Revival, Mediterranean, Victorian and American Colonial homes sit side by side. And each have unique details that make them stand out even more... Juliet balconies, triple-arched adobe doorways, stained-glass windows, floating staircases, family crests... everything a little girl would want if she were to design her own palace!
"Lafayette Square was the last and greatest of banker George L. Crenshaw’s ten residential developments in the city of Los Angeles. Since Crenshaw wanted this development to have a European flair it was designed as an elegant residential park centered on St. Charles Place, a broad palm-lined avenue with a landscaped median. Early residents of Lafayette Square included the founder of Pepperdine University, George Pepperdine, actors W.C. Fields and Fatty Arbuckle, art collector Norton Simon, boxer Joe Louis, and the Crenshaw family. Houses in Lafayette Square reflect residential styles popular during the 1910s and 1920s. Several houses, such as architect Paul Williams’ own home, were designed in the Modern style, exemplifying an important trend in Los Angeles’ architectural development."
- from LA City Preservation's website
We went into six separate houses. The first was the Crenshaw house, built in 1912, where we signed in and met up with the others on our tour. Appropriately used as "the Welcome House" this was the first residence erected on the square and was used as a type of model home to attract new development. We wandered around the three-story Arts & Crafts mansion and ooohed and aaahed at all the fine details- the sconces on the staircase finials, the built-in library, the tiled roof. And then we headed off with our guide, David, and walked a few blocks to our first stop for dinner, "the Appetizer House".
This was the most modern of all the homes we visited, built in 1953 and still used by the same family that commissioned Paul R. Williams to build it. It had a two-story glass wall and an indoor rock garden. Much of the decor was original to the period, including the old time-y TV and the Sputnik-style light fixtures. Here, we ate arancini and caprese bites and drank champagne. And found out that this house was recently used in a Dakota Fanning movie (but nobody knew which one :) Matt and I never get over just how nice everyone is at the WAHA functions- especially the ones involved with the organization, you can tell they really love what the group stands for.
Then we walked a couple of blocks to "the Salad House", built in 1921, which was one of my favorites. It was so charming and full of little cooky details that I appreciate. The current owners of this property have painstakingly restored it to its original state and from the looks of the before and after photos, they had their work cut out for them. Again, Matt and I wandered around the house and I coveted the antique quilts and the amazing tiled bathroom- until I saw the stove in the kitchen, and it was love at first sight. I still dream of her at night... 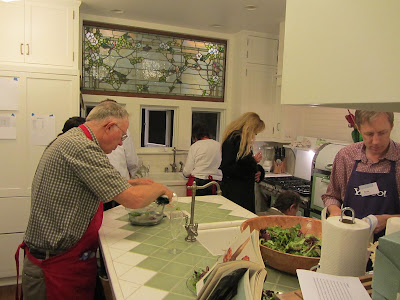 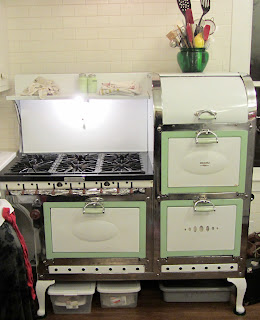 Having found some wonderful people to chat with, Matt and I were almost left behind when our group walked on to "the Soup House". This ginormous Mediterranean Revival villa was built in 1924- and with triple arched french doors and an invitingly open floor plan, this place was designed for entertaining. We got our mugs of delicious roasted winter squash and fennel soup and went from room to room (trying to spot all of the family crests as we went). Matt introduced me to a friend of his he meet  participating in the Living History Tour at Angelus Rosedale Cemetery back in September. Another incredibly nice and interesting person... I think we found where all the awesome people in LA hang out. 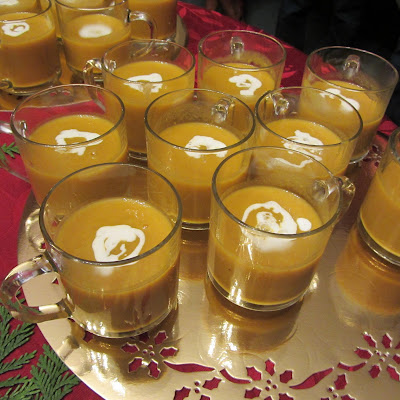 The large brick "Dinner House" was built in 1925. Matt and I sat with two other couples and we chatted about the tour, the neighborhood, our pets... all good stuff. We stuffed ourselves with pasta and veggies (and other foods for the non vegetarians)- and wine. I sat right next to one of the four beautiful Christmas trees that decorated the home. 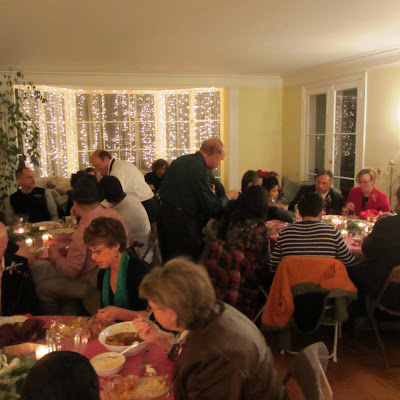 The final house on our tour really takes the cake, no pun intended... In an alternate reality, I would live in "the Dessert House", a jaw-dropping, 6,000 square-foot, Spanish Revival villa built in 1928. I loved the wrought iron banister, the 20-foot-high beamed ceilings, the imposing fireplace... but this place had a Juliet window facing from one bedroom into the foyer. Amazing. And its where we got gooey chocolate brownies with homemade whipped cream and salted caramel. I mean, c'mon. 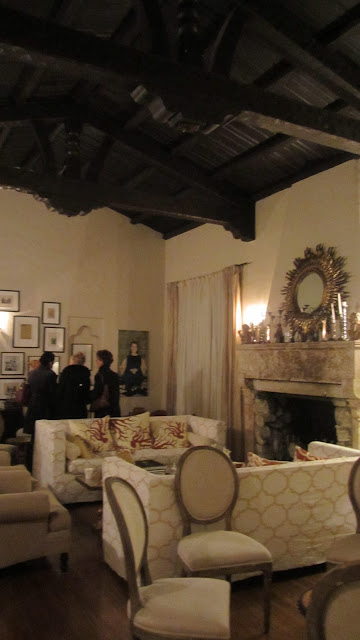 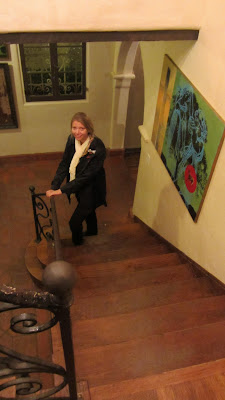 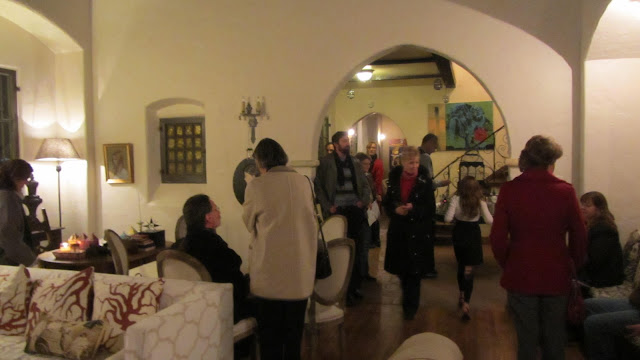 Click here for an unrelated site that shows some of the homes in this neighborhood- just to give you a sense of the awesomeness of this neighborhood...
All in all it was a wonderful night. We got to wander around beautiful homes, converse with friendly people, eat delicious food and enjoy the lights and other such pretties of the holidays. And when it was all over, I got to go home with the best guy in the world. awwwwww.