If there is one place that could be pinpointed as the source of all Christmas cheer in the world, I believe it would be Tivoli Gardens in the winter. It must be the birthplace of all things festive and twinkling, for I have never in my life seen a higher concentration of yuletide merriment.
Its amazing enough that this attraction lives in the middle of Copenhagen, its not too often that an 'amusement park and pleasure garden' is within a city's center. On top of it being so incredibly easy to get to and from, the fact that it is located at one end of Copenhagen's main walking street (the ever bustling Strøget) makes the park part of the city.  As in, the city and it's history has influenced the development of the park (it was burned by Nazis in WWII) and the park has played an important role in the culture and history of Copenhagen (it has inspired many Danish artists, musicians and authors). And it certainly helps that Tivoli Gardens has been there a long time... it is the world's second oldest amusement park. It opened its doors in 1843 and is still one of the most popular attractions in Denmark. 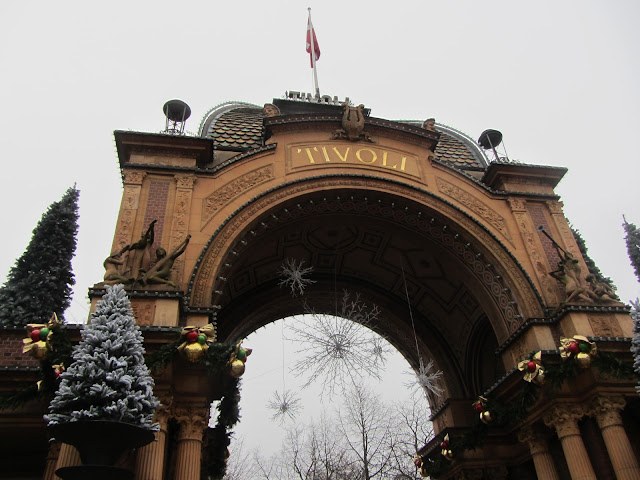 My mom and I, who are both easily impressed by holiday pretties, thought the decorations around the front of the park were delightful-- the snow-covered trees, wooden toy soldiers and twirling bears. But once we passed underneath the impressive arched entrance... we were blown away! We were actually walking in a winter wonderland! 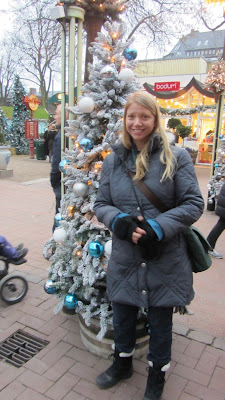 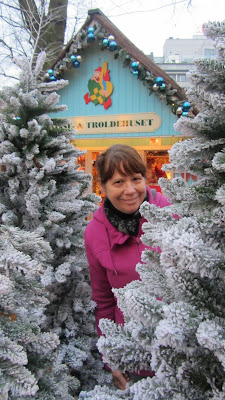 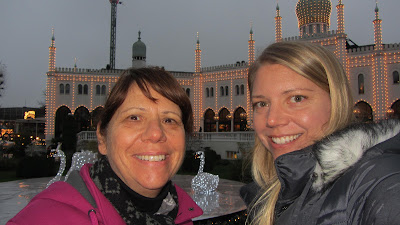 One of the greatest things I noticed about Tivoli, is how it is a perfect mix of grand buildings covered in lights, and cozy colorful shops and stands that welcome customers with warm glowing interiors and wafts of cinnamon-y goodness. My photos don't do the place justice, but you can get the idea... 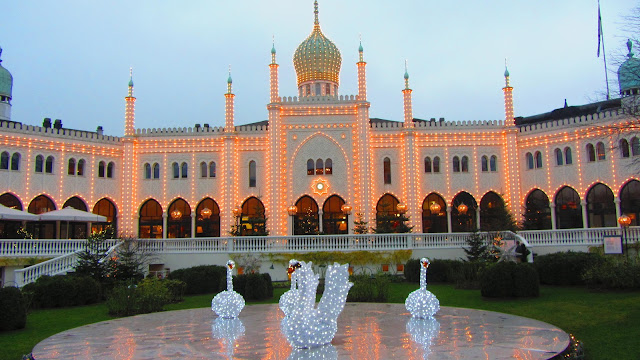 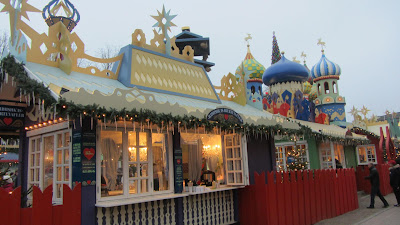 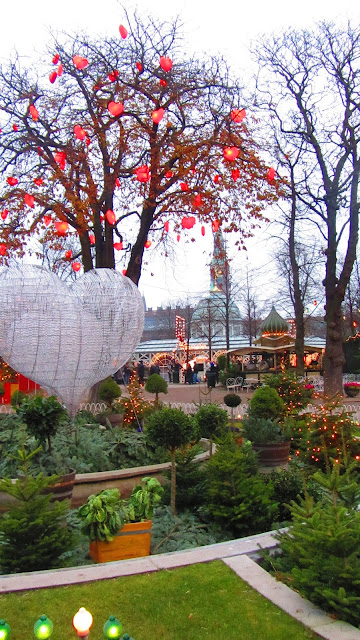 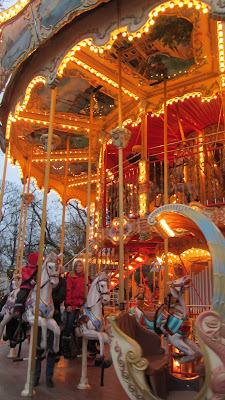 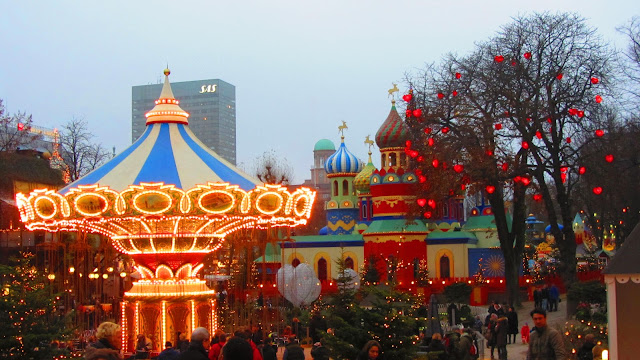 And it is difficult to walk through Tivoli Gardens and not make a few comparisons to American's most beloved amusement park, Disneyland. Yes, yes, the differences are numerous,  and I am not claiming that they are equivalent... but there are unmistakable similarities when it comes to the overall happy vibe of both places, a similarity that is not coincidental.


Read the following is taken from the Tivoli Wikipedia page:


Tivoli is always evolving without abandoning its original charm or traditions. As Georg Carstensen said in 1844, "Tivoli will never, so to speak, be finished," a sentiment echoed just over a century later when Walt Disney said of his own Tivoli-inspired theme park, "Disneyland will never be finished as long as there is imagination left in the world." Walt Disney during a trip overseas with his wife Lilly visited Tivoli Gardens. Walt was so impressed with the Danish amusement park, he immediately decided Disneyland should try to emulate its "happy and unbuttoned air of relaxed fun." 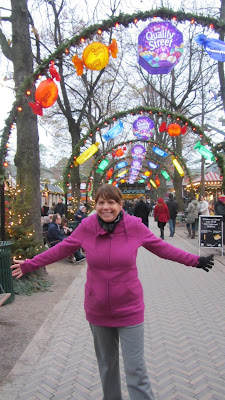 After our walk down candy lane, we were ready to stop for a bit of food and drink. There were so many choices, and everything seemed homemade and wholesome (although, admittedly not healthful). We inhaled the sugary smells of candy apples, chocolate covered waffles and fresh spun peppermint ribbon before deciding on a glass of  mulled wine, or gløgg. 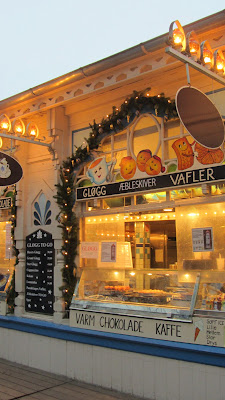 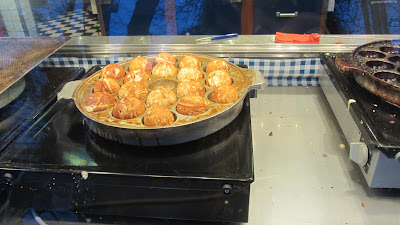 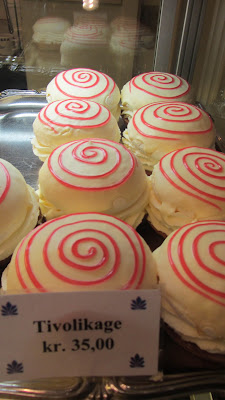 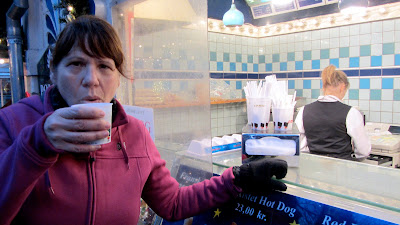 The place we chose was both a sit-down restaurant and walk up counter. We ordered from the outside and watched as the young woman mixed together the cloves, raisins, cardamom, currants, brandy and other such goodies into our steaming cup of gløgg. It was sweet and warmed us up, inside and out. We stood at a table, sipped out drink and enjoyed a few minutes of people watching.
By this time, the sun was setting and the park began to twinkle with even more lights. We wandered past a few rides and found one we couldn't resist. A Journey Through the Stories of Hans Christian Andersen. And since Mr. Andersen, or HCA as he is sometimes referred to, is one of Copenhagen's most famous residents and Denmark's most beloved writer... and because my mom and I had brought abroad with us a book of his tales, this ride was a must. (and, it shall receive its own post soon- as it was truly a very Happy ride!) 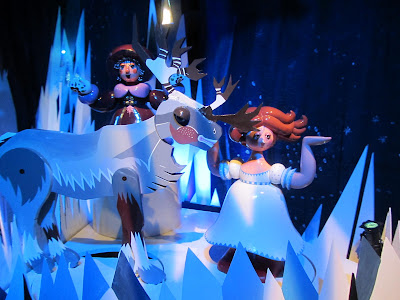 When we emerged from the HCA ride, the sun had gone completely. It was wonderful to see the park during the day, but the night... Oh, the night! 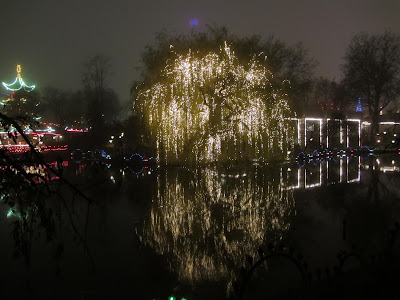 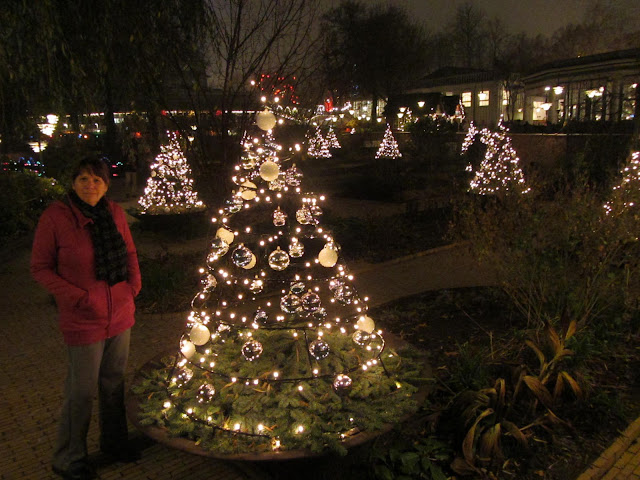 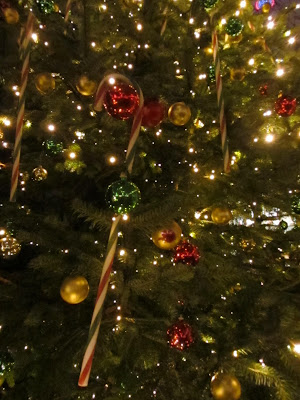 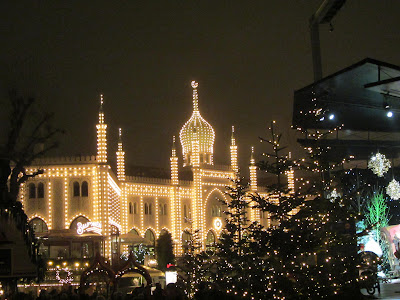 My mom and I did a bit of shopping. The stands and stores did not sell the typical amusement park souvenirs. Instead, we found artisans working away next to their completed products for sale. There were hand-knitted hats and slippers, hand-blown glass ornaments, hand-dipped candles and other such crafty goods. I was drawn to the shops filled with Christmas decor. They sold pretty woven red-and-white hearts, angels and Christmas pigs... although I never did get the significance of the Christmas pig! I also saw one shop where one could buy small home electronics and another that sold sporting equipment. I imagine these appeal to the locals more than the tourists- regardless, it made for great Christmas shopping. 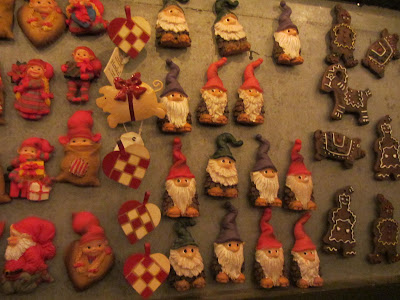 In a quiet part of the park, away from the rides and the shops, there is a barn and pen of hay where about a half dozen reindeer lazed about. They were beautiful with their shiny coats and iconic antlers. I am not the biggest fan of this sort of display of animals, but these guys seemed pretty content and didn't pay much attention to the 6 or 7 people who stopped by to say hello. 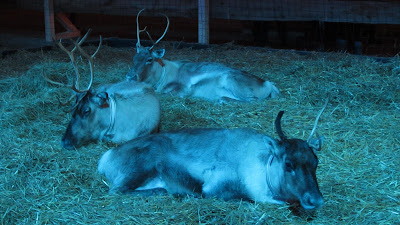 Our visit to Tivoli was magical, there''s no other word for it. It is totally a place for Dreams and Happy Things!

I feel totally blessed to have been able to visit this special place, and even more fortunate that I was there during the holiday season! For me, the visit was like an injection of Christmas cheer that motivated me to decorate and celebrate this year...

I wish a Merry Christmas and God Jul to all!!! 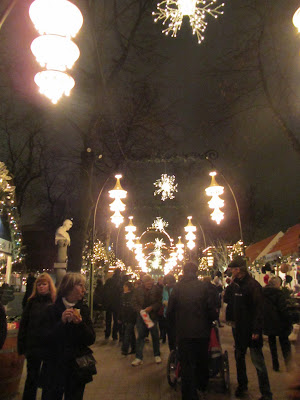 And just for an extra bit of fun, here is the Park's advert played on Danish television...