Saturday was my man Charlie's 1st birthday party. We had a lovely day in the park, with tons of his friends. We ate food, played with bubbles and spent a little time at the playground. For the few of us there without babies, it was a trip seeing so many little ones at once. There were babies in tutus and babies with big blue eyes, and babies with full heads of hair, and babies with enormous chipmunk cheeks... babies!
But Charlie was the baby of the day. He took his first bite of cupcake/frosting and made the biggest gross out face, but he gave it another chance and seemed to like it alright. I think he's going to grow up to be a fan of healthier foods! He also took 4 steps in a row on his own, a personal best. Like his auntie said, "it's his party so he thought he better show up!"
Mom & Dad and the boy... deciding if he likes cake. 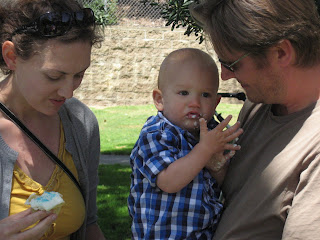 Such a handsome happy boy. 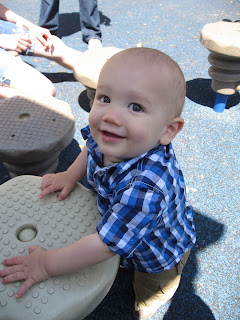 Dad & Charlie playing on the swings. So many giggles! 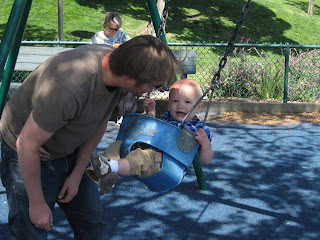 Matt felt left out , so he copied Charlie...