Matt's cousin has a daughter in the 2nd grade and her whole class is doing a project on Flat Stanley-- which is awesome and fun and aimed at raising literacy and interests in other peoples and places. Super! So, she made her Flat Stanley doll and sent it to Matt, with instructions to take him (although we called him "her") on a few local adventures. We took her to the beach, we took her out to eat with us, and we took her to Vegas. Yep, Flat Stanley became part of our little family. (And you don't know how awesome your hubby is until he is willing to pose for photos with a paper doll at a craps table!)
On her last days with us, we decided we ought to show Stanley our own neighborhood, so we went on a walk, about 6 miles by the time we were finished, and discovered downtown LA.
Starting (and Matt's insistence) at the gym- 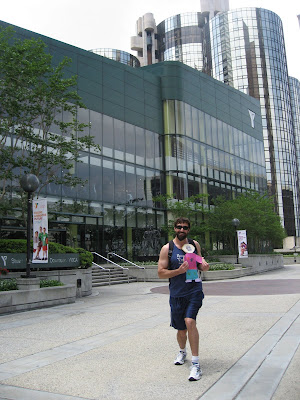 Then posed in front of the Walt Disney Concert Hall, the winter home of the LA Philharmonic (Designed by Frank Gehry). Another (slightly more professional) photo shoot was going on and I wanted Matt to ask if Flat Stanley could pose with the models, but he was too chicken to ask. 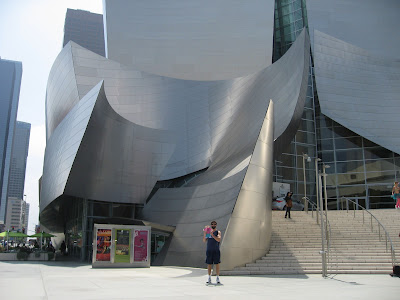 Then off to visit Fire House No. 1, the first fire station in Los Angeles (now a museum) 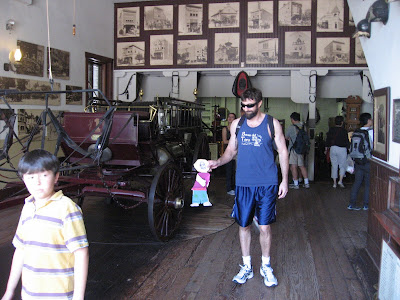 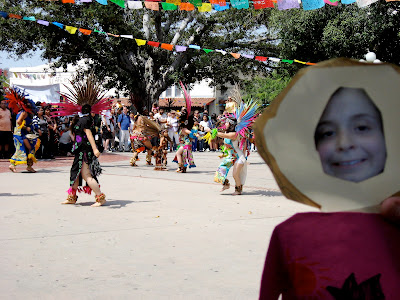 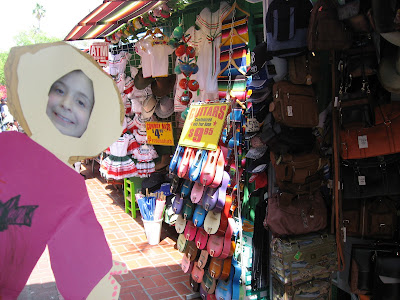 -before heading to Union Station 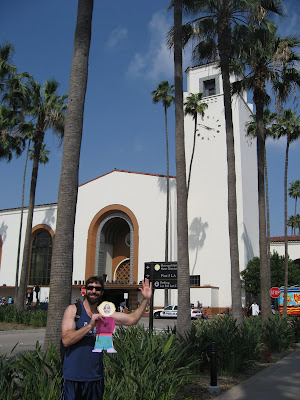 to admire the architecture and enjoy a little people watching. 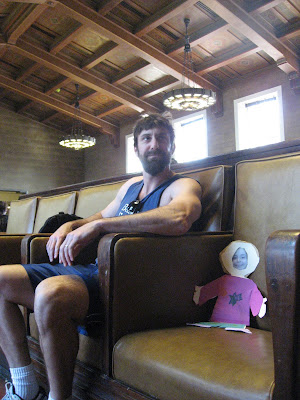 Little did we know it happened to be National Train Day, and the place was full of festivities and train enthusiasts! 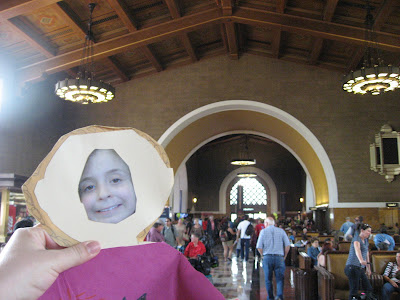 We then walked past City Hall (Stanley took this picture) 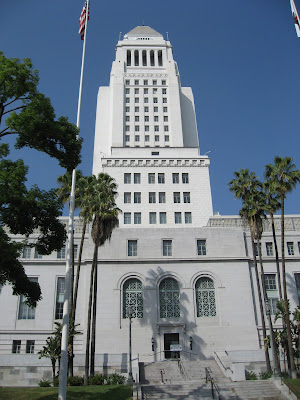 And then the Bradbury Building, which I was so happy to see was open for us to visit! 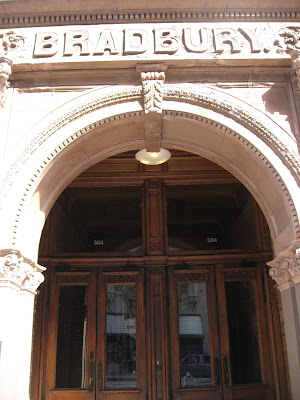 None of our pictures could do this place justice! It's amazing filigree iron work, intricate staircases and open glass ceiling are truly spectacular! No wonder it has been used in so many films. I guess I ought to see Blade Runner now... 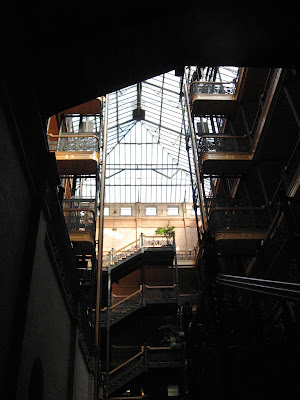 Stanley posed in front of the iron caged elevator 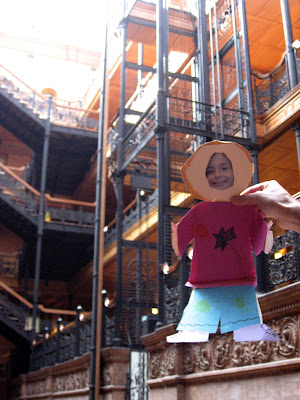 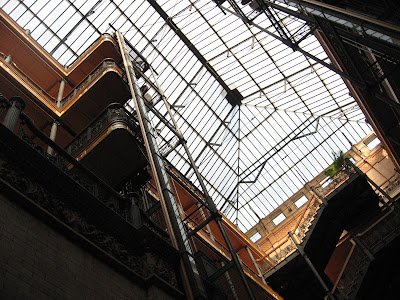 And then we ran into Charlie Chaplin, well, a life size bronze statue. He let Stanley pose on his lap. 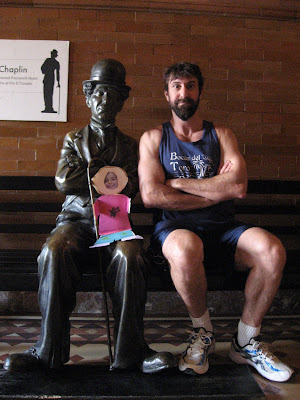 Looping back toward home, we found a great music shop that sold hundreds of super colorful and bedazzled accordions- just calling out to be played! 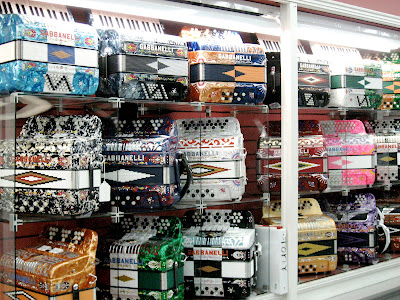 By this time we were getting tired, so instead of climbing Bunker Hill we decided to take Angels Flight- aka, the shortest railroad in the world. 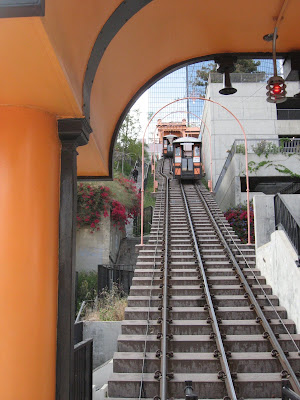 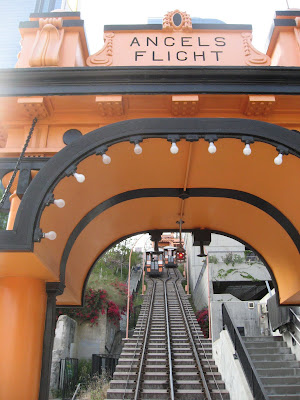 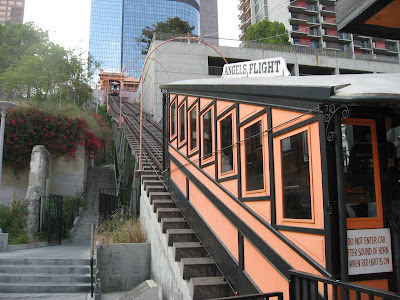 Stanley and I were told to sit down by the conductor... she's always getting me into trouble! 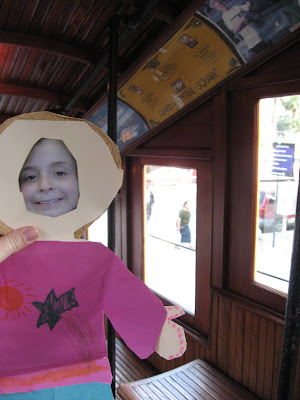 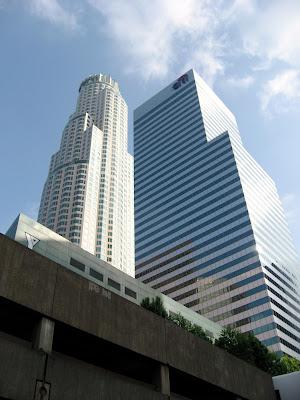 And we passed the Bonaventure... 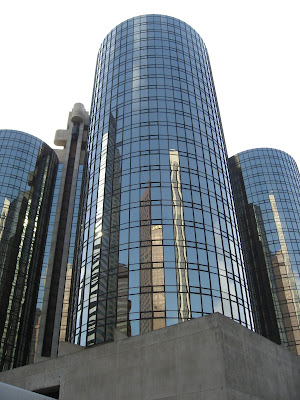 And headed back for home. 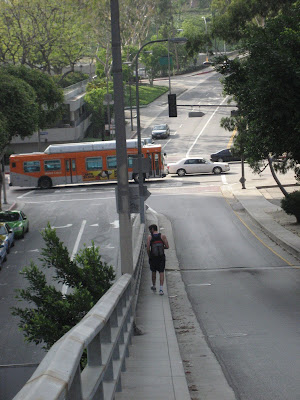 Thanks for giving us an excuse to tour our our 'hood, Stanley!