Dance of the (not-yet-bald) bald eagle

A few weeks ago, Matt and I took a weekend trip out of the city with a couple of friends. The trip was exactly what you'd want a weekend in the woods to be: fun, relaxing and invigorating. But there was one moment that stood out above all others, a real highlight to the weekend. And that was when we witnesses the arial dance of a beautiful bald eagle.

His head was not yet white, so he was not yet five years old, but the folks we were with, animal experts to say the least, identified him right off the bat by his size and bright yellow feet. And for about a half an hour, we watched him fly in swoopy dips and circles around the tree tops. He was so graceful! Every once in a while, he'd land-- usually on the tip of the highest branch and look down on us. Maybe he was determining if we'd be too heavy snatch up for lunch.... or maybe he wanted to show off his fantastic skills to people who would be awe-struck by him... or maybe he was asking us to stop our yammering and camera clicks, as we were clearing out his hunting grounds. Regardless, I think we all shared a 'moment'.

I have seen bald eagles before, and every time feels special. And while I absolutely love turkeys (proven by several past posts), and I think they would have represented this country with great nobility,  I do get why Ben Franklin lost out when he voted against the eagle as America's national bird. Eagles have a wonderful mix of strength, beauty, agility, ferocity, power, majesty and, yes, freedom. Wonderful ideals for a country...  but much harder to live up to than the eagle makes it seem.

Our photos are not fantastic, as we have a little point-and-click and it was all the way zoomed out-- but you'll get the idea. I wish they showed his size a little better, as it is hard to get a sense of scale from the shots we have.  But I don't think that even a photographer for National Geographic could fully capture the moment. This was one of those rare magic times when you just had to be there... 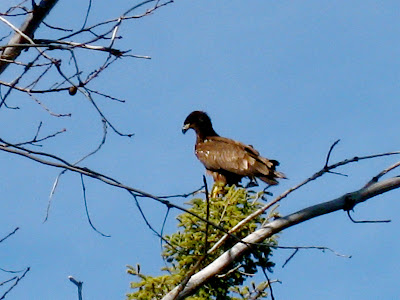 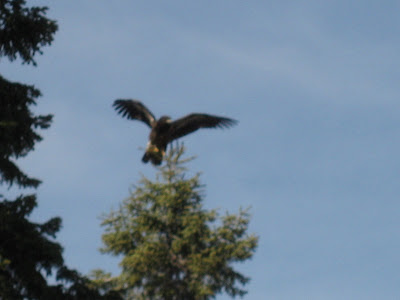 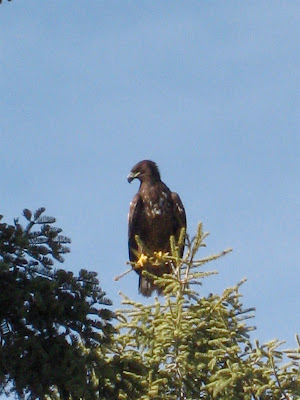