There was a star danced, and under that was I born. - William Shakespeare 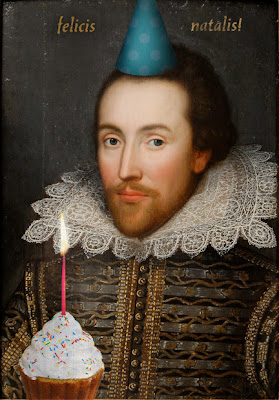 Hazzah to the Bard! Today, is William Shakespeare's 447th birthday. We think. 'Tis also the 395th anniversary of his death. So, for anyone not paying close attention, that means, our most revered playwright and poet, perfector of the Sonnet, inventor of over 1700 English words,  walked this earth for 52 years... to the day. He is believed to have been born on April 23rd, 1564, and to have died April 23rd, 1616. In true poetic style, Shakespeare left his admirers with an option on this day; to celebrate his entrance into this world, or mourn his exit.
(For anyone interested in the specifics, here is an excerpt from an article on the topic. The title links back to the original site.)

The baptismal register of the Holy Trinity parish church, in Stratford, shows the following entry for April 26, 1564: Gulielmus filius Johannes Shakespeare. The actual date of Shakespeare's birth is not known, but, traditionally, April 23, St George's Day, has been Shakespeare's accepted birthday, and a house on Henley Street in Stratford, owned by William's father, John, is accepted as Shakespeare's birth place. However, the reality is that no one really knows when the great dramatist was born. According to The Book of Common Prayer, it was required that a child be baptized on the nearest Sunday or holy day following the birth, unless the parents had a legitimate excuse. As Dennis Kay proposes in his book Shakespeare:

If Shakespeare was indeed born on Sunday, April 23, the next feast day would have been St. Mark's Day on Tuesday the twenty-fifth. There might well have been some cause, both reasonable and great -- or perhaps, as has been suggested, St. Mark's Day was still held to be unlucky, as it had been before the Reformation, when altars and crucifixes used to be draped in black cloth, and when some claimed to see in the churchyard the spirits of those doomed to die in that year. . . .but that does not help to explain the christening on the twenty-sixth (54).

No doubt Shakespeare's true birthday will remain a mystery forever. But the assumption that the Bard was born on the same day of the month that he died lends an exciting esoteric highlight to the otherwise mundane details of Shakespeare's life.

But what's the point in splitting hairs? Shakespeare did not live in a time when accuracy was all that important. The man used several different spellings of his own last name! He was born, he wrote and then he died. And the world was better for having him! He has gifted his works to countless generations... and we didn't get him anything. How awkward, it is his birthday, after all. This got me to think though, what do you give to the Bard who has it all? If Shakespeare was alive today, and I was invited to his birthday party- you know, just a small gathering of a few close friends (like me) to enjoy a little food and drink general merriment-- what would I gift to the b-day boy? (Oh, I'll come up with any excuse to do unnecessary online shopping!) 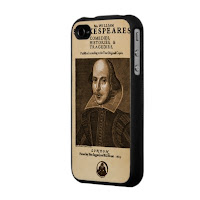 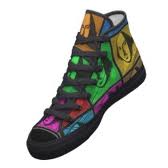 Maybe he'd fancy the First Folios iPhone app, or some snazzy hightops bespangled with his portrait?
Or maybe we could just continue to value his work-- to perform his plays on stages around the world and remake them into movies of varying quality. We can ensure that high school Freshmen read not the Sparknotes for Romeo and Juliet, but the actual text, and we can prove our cleverness at cocktail parties by discussing Sonnet 130.
Of course, we can take it farther into a realm of Bardolatry, like Thomas de Quincey whose worship of Shakespeare rings through his classic 1823 essay "On the Knocking at the Gates in Macbeth":
"O, mighty poet! Thy works are not as those of other men, simply and merely great works of art; but are also like the phenomena of nature, like the sun and the sea, the stars and the flowers,—like frost and snow, rain and dew, hail-storm and thunder, which are to be studied with entire submission of our own faculties…".
Well Tom, I don't think I'll deify the Bard as you have, but I will carve a moment today to read his words and tonight, in his honor, raise my glass, To Bill!