Today has been the strangest day! The kitty boys woke me and Matt up extra early, they were going frantic and we didn't know why. We tried to ignore them and get a few more minutes of sleep, but when Linus, Sherpa and OB yowled their fiercest hunter's cry and pounced on the same spot, at the same time, we knew there was something out of the ordinary about their wild behavior.
I got up to investigate, shooed all three boys out of the way, and couldn't believe my eyes! They had trapped a tiny yellow finch behind my dresser!!! Never in all my time living in the city, have I had a bird fly into my house (back at my parent's place it happens about once a year, so I kind of knew what to do).  Matt grabbed the boys and put them in another room. I know, they get so little excitement it was almost cruel to keep them from witnessing our rescue of the bird, but the poor feathered thing looked frightened enough- he certainly didn't need three more predators breathing down his neck.
With a small towel, I reached my hand behind the dresser and picked up the finch. He was frozen in fright. Matt and I took a closer look while he was in my hand, he didn't move a muscle or blink an eye. His feathers were mostly the color of a soft lemon cream, with markings on the back of his head in variations of gray and black. (We took a picture, but are no longer in possession of our camera, but he looked a lot like this bird I found in a Google image search). 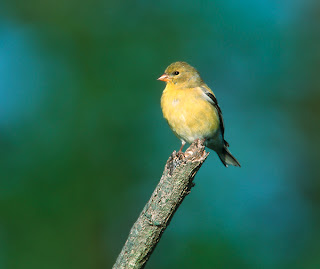 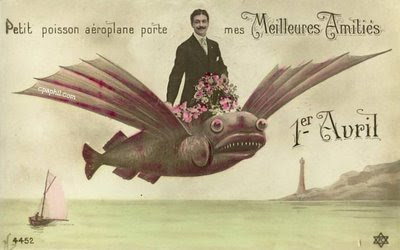 For more stories of real pranks and hoaxes pulled on this date through history, visit this blog. Enjoy!